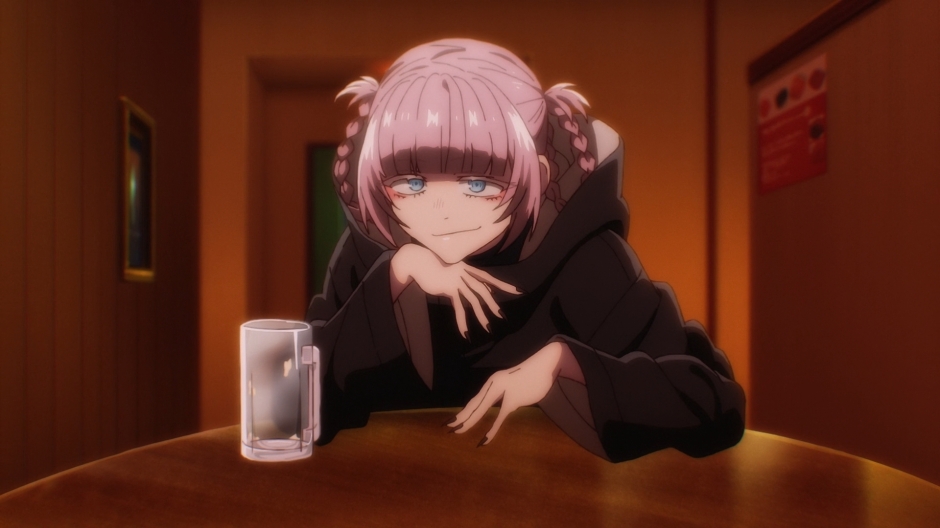 Taking a vampire to your local four in the morning restaurant breakfast scene.

We resume from our cliffhanger from last week: Ko confronted on the street by a young woman. One who happens to possess the other half of a watch communicator from his childhood.

Processing the situation, Ko remembers a scene from earlier in the night we had not seen last time around. While enjoying the night together with Nazuna, personal walkie talkie transceivers and all, the topic of Ko and his circle of friends had come up. When can one consider themselves a friend? If you have not spoken to someone in years, would it be rude to still call them or yourself a friend? So on and so forth.

It is a topic which Nazuna has some rather easygoing thoughts on. Ulterior motives or not regarding Ko and his aspiring vampire love. She thinks someone is a friend when and so long as you consider them to be one.

Furthermore, she brings up a more personal point to Ko: the observation he does want friends. He is not the kind of guy trying to make an active push to be left alone. He is not dismissive of the idea of spending time with others. He is having fun with Nazuna, after all. He just feels out of sorts and out of place among many of his peers. There is no denial or dodging the subject. As a symbolic gesture, he had placed a call on the watch communicator from the childhood story he told her earlier.

Reaching out, even if nobody would be listening.

To return to Ko in the present moment, we can assemble with him what has occurred. The teenage girl with the other half of his old toy is Akira Asai. She lives in the same apartment complex as him, and has since they were children. When he had the bright idea to leave half of his transceiver toy in a conspicuous place for someone else to find, he had left it on top of the Asai family mailbox. They may have played together as kids, but he had no concept of what her actual apartment number was. Akira interpreted the toy as being something Ko had given to her as a gift. She never made a call from it herself, and waited for Ko. She had thought his lack of initiating a call as him being busy with other friends, and thought she had missed a chance. She still had the toy though. After it went off these years later, she took it with her on her morning walk before school.

When Ko hit the button while talking with Nazuna, he was casting a call into the wind. With the understandable expectation nobody was going to hear it. Let alone respond to him in person. Now confronted with an actual result from his actions, he approaches Akira and pats her on the shoulder.

He tells her how it has been a while and it is good to see her again.

It is strained and he has definite anxiety about the whole situation.

But, he does tell her.

According to Akira, she takes early walks before school.

As in, four in the morning type early walks. She thinks it would be nice to keep meeting around this time. Ko has not been coming to school as of late, after all.

In a way, this works out for Ko. He has been maintaining an overnight schedule due to Nazuna and her operating hours. Give or take an hour or two for time of day differences due to the seasonal rotations of the Earth however, four in the morning is quite a prime vampire time. Ko keeps leaving Nazuna to go hang out with Akira in secret, becoming enough of a pattern she jokes about him seeing another woman. Complete with her usual indulgent theatrics about already knowing all about it.

She did not expect to, in fact, hit the nail on the head.

Nazuna taking the opportunity to crash by and introduce herself could be handled in all kinds of ways. Even with this being an adaptation of an existing manga. The show needs to juggle with establishing the childhood crush feelings of Akira, as well as Nazuna placing her own stake in the matter. There are these more sensitive character conflict motivations, such as the little meetup Ko and Akira are having. While also attempting to maintain the balance between comedic zingers.

Akira having the beats to notice what names and honorifics Ko uses for Nazuna is important in establishing her perception of the situation. Nazuna showcasing herself to be an unambiguous vampire is a larger moment to be sure. But is holds significance on multiple levels. Sweeping him away to drink from and having him put in a position so Akira can see the bite marks is, of course, both theatrical and power play. It is a possessive move or challenge before the potential threat of a childhood friend to the relationship. It has little of the sensitive place and timing Nazuna was harping on last week.

However, by leaving no ambiguity to her true nature, Nazuna has also revealed to Akira something quite personal. She could try to hide her vampirism. A dramatic kiss instead of a bite, perhaps. But such secrets could cause complications the longer her relationship with Ko continues. To return to the conversation about friends, a childhood friend of Ko might want to know this key detail about Nazuna. As well as measure how Ko might react to his friend knowing he has been seeing a vampire.

I appreciate how the three of them go out for breakfast together after this.

Chatting together, with a restaurant all to themselves, may not have all the bedazzled night skies the series has enjoyed deploying so much.

But the character dialogue is no less colorful when it comes to asking questions and trying to work through things. Why does Ko allow Nazuna to drink his blood? Why is he not coming to school? Ko tries to walk through the idea of how much he was not enjoying being himself at school. As this is a restaurant chat and not an interrogation, Akira gets into mentioning her own problems when it comes to questioning if her old friends are still friends.

Akira does call Nazuna a monster, but in a more laconic conversational fashion.

Nazuna for her part has her own verbal landmine to plant. What has Akira been up to or otherwise doing all this time? Why did she not keep in touch with Ko? The comedic bit to this slow dramatic question as she departs: it gives her a moment of opportunity to get out of paying her part of the restaurant bill. A not insignificant percentage, having drank multiple beers. But the character implications remain in the air. Both Akira and Ko should think about these things.

While Nazuna and Ko had something of a minor speedbump disagreement the other week, we now have a more poignant conflict.

But there is a definite problem.

“How am I supposed to know if you do not tell me what you are angry about” is not the winning play in moments like this. As Ko now learns.

With the advantage of flight, Nazuna can create distance Ko can never reach on foot. He can claim all he wants how he wont lose sight of her. But it is futile. I appreciate the contrast in how the same song which played as Nazuna flew Ko through the skies after their transceiver date is the montage music as he searches alone. While rushing for a bit in a desperate attempt to keep up, he has to make the physical call to slow down. So his pace becomes more wandering and pondering. He can walk the city and spend some time thinking.

Numerous streets and at least one skin breaking face plant into civic infrastructure later, Ko has enough presence of mind to use the transceiver gift he gave Nazuna.

“I am sorry, over” has a bit of thoughtful human cuteness to starting the apology, to maintain the standard practices of the communication device.

But it is also starting very much at the bottom of the conversation tree. Nazuna makes him walk though every branch. What is he apologizing for? Ko considering it was because he was seeing a friend in secret. Well, she thinks it is great for him to have friends, why would this make her mad? And so on. Ko comes to say he wants to make up with Nazuna.

Knowing a relationship warrants making up is an important step. For your own sense of self and recognition, of course. You should always try to realize what is important to you and why it has this importance. But also by all means for understanding the feelings of the other person involved. Without them, the relationship does not exist. It is nothing. You have to want to work through things and be better if you have created a problem.

On the viewer side, we should remember the little emotional scuffle  from last time. Nazuna made some big statements about going around town looking for blood targets, and it caused Ko to feel a little upset. But she admitted to him later in her apartment how she made it up. She had been looking for him, but was having a difficult time saying so at the time. She made the personal push to make up. Ko needs to do the same.

Nazuna returning and giving Ko a kiss on his bloody mouth on  walkway bridge?

Now she gets to drink all the timing and intimacy she did not get to enjoy when biting Ko in the park earlier. 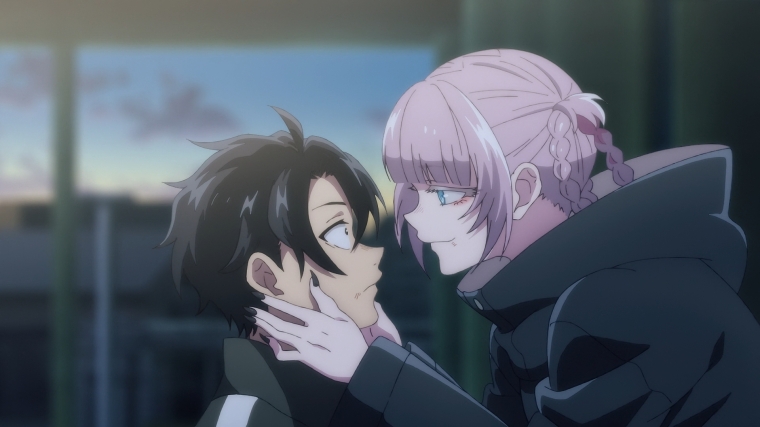