Spring looms on the horizon, so as a reminder: When was the last time you gave your computer a cleanup scan and full backup?

As I mentioned last week, the “Kindling” chapter of Girls’ Frontline is a pivotal point in the story. We are transitioning away from our extended tutorial phase and introductory arc.

Tackling this chapter in more than one episode was already a given. But to get the end of episode next title mechanics out of the way first: this will take three episodes. Which, for a show which has felt crammed to the gills at points early on, is a real relief. Comfortable breathing room will allow this material to bring us in for a landing as we reach the end of the season. Plus, for what I expect to be the end point.

All things considered, if I was forced to make a choice: I would prefer a series to finish strong. Just in case we never get any more Girls’ Frontline anime, but the same applies to anything else really. The opposite path, a strong series opening arc which crashes and burns as it lurches towards an unfulling conclusion, is a fate almost any given anime fan has faced. And when a sequel never comes, the squandered opportunity stings even more. But we have a few more weeks to go yet. I can make a final determination on how much clemency I want to give the more unsatisfying bumps in the road once we reach the end.

As the middle part of this three episode chapter then, we have a mix of payoffs and some setups to tie us over.

The metaphorical elephant in the room I have needed to dance around throughout the entire series is out of the bag this week:

ST AR-15 was infected by a Sangvis Ferri virus program.
And she has known this for some time.

From her being able to gain Sangvis command authority back in Hunter’s base, to various incidental moments ever since linking back with the AR Team. Those times of Gentiane having a sense of something being up, but not being able to put her finger on what. Scenes with the old anime tell of not showing a character’s eyes, because they are trying to hide something. Her immediate identification of every Sangivs unit at Destroyer’s (old) base last episode, and a path of how to get around them all.

So she has been putting the quirk to work.
But it has also put a lot of folks in extreme danger.

Something I always liked about this plot point, even in the original game, is how… I suppose “understated” the reveal plays out, is the word I am looking for.

The characters are surprised, worried, and concerned by this grave news. But it is not treated like a bombastic dramatic revelation in its own right. The androids on the AR Team might be custom elite models by 16Lab. But at the end of the day, they have computers for brains. Pretty much any computer can be hacked, given the right tools. So while M4A1 and SOPMOD II are chewing away at themselves over this, it is more because their friend is being detained as a security risk. The basic idea of a computer virus is not treated like an explosive unheard of idea.

The questions then become more a matter of how, when, why, and so on. Not just for Sangvis Ferri’s side of the coin either.

Again, even for anime-only viewers: the point has been set up for several episodes to reveal ST AR-15 having a viral infection. And with the clear indication of her having known this about herself, there is the open question of why she would not have had this looked at sooner. As well as the matter of why, later in the episode, she broke out of the Griffin detainment facility and ran away.

But this is a topic for another day.

To take care of some smaller but noteworthy points in the middle here:

The anime made a particular direction change from the manga this week which was interesting.

A quite small one, but it gives me an opportunity to mention something which has been on my mind over the course of the series.

During the counter-assault on Destroyer’s position, the sniper team in the manga features the character M200. Here in the anime, she has been replaced by WA2000.

Now, this is not the first time WA2000 has been swapped in for another rifle character. Last time however, it was due to voice actress controversy regarding NTW-20. This time, to the best of my knowledge, no such situation is looming over M200’s actress. This does maintain consistency with WA2000 being in the same squad as Super SASS, because of the previous character swap situation. But of course, squads can hold several characters. Plus, a manga or television retelling is by all means free to ignore accepted metagame mechanics. A sniper squad with three rifle characters would not seem odd to anime-only viewers.

I will go out on a limb here and make an assumption.

The anime has been very forward with increasing the heights and proportions of any character who might be able to be considered a literal child. PPSh-41, for instance. It is fair to think there is some kind of style guide in the production chain determining this. I have appreciated it in fact. It allows me to be more comfortable knowing the adaptation is not going to delve into Gunslinger Girl territory in how it handles its characters.

The small, quiet, and droopy-eyed M200 is, I assume, far too close to this particular sun.

M200 never appeared in the source material during these story events. So from a “canonical” standpoint, her absence here does not impact anything. While she may have been in the manga, dropping her appearance rather than redesigning and resizing her character is much less of a risk. It would be extra work in dicey approvals for what amounts to seconds of screen time.

Having WA2000 drop in again also allows for some anime-only viewers to recognize another character they saw a few episodes back, and better tie her back to which commander she works under.

Regarding those additional commanders, seeing them all in the same place for some scenes had some decent moments.

For instance, Kamolov carrying PPK on his arm and shoulder after the Griffin base assault. He has been depicted as an energetic and well meaning, but kind of unobservant Commander. Just the other week, after getting trounced by Gentiane in a mock battle, he was asking PPK what she was best at. While she had a rather suggestive and snarky response, it was also telling. This was a question he had, it can be implied, never thought to ask her before.

Showcasing him carrying PPK as he meets up with Gentiane and the others after the Griffin base assault is a good way to show him trying. To at least begin to practice what Gentiane understands: being more supportive to his androids as peers and friends. The same as when he makes it a point to be among the first to speak up to defend ST AR-15. How none of them would be alive without her help.

Franklin getting dunked on and thrown under the bus by every other Commander is also a nice bit of knowledge check levity.

Because, yeah: I am sure most viewers forgot about him during the base assault last week!

It’s not a bad gag to have a character like him around.

SOPMOD II gets multiple expressive moments over the course of the episode.

Which, as the most prone to emotional outbursts of the AR Team, allows her the space for the narrative weight she needs to carry. While other Griffin androids are repurposed civilian and commercial models, their unit is a special combat focused force from 16Lab. It bugs SOPMOD II how upset and uneasy she is about the ST AR-15 situation. She knows her brain is a computer. These emotion modules are confusing because she could be a more ruthless killing machine without them. But she also likes to run off and be the first to greet Gentiane and give her a big hug when returning to base. But this is not part of her “job,” per say.

While this is not itself the most groundbreaking material in android fiction, again, this chapter is the pivoting point for where we can go from here.

This is not the only android facing the same dilemma in this moment. Which is what helps make this medicine go down even in the original game version of events. SOPMOD II’s beginning attempt to unravel an existential crisis of purpose is juxtaposed by some similar issues on the Sangvis Ferri side.

Destroyer had a few seconds of airtime last week, and this episode brings in Dreamer as well. Executing on their interplay was key this episode. Destroyer may project an image of supreme confidence when things are one hundred percent in her favor. But anything less than this, and she begins to get nervous, jumpy, and worried. Which is the first major time a Ringleader class unit is shown to have such sides to them. Even when she makes a break for it and is attempting to fight off the superior number of Griffin forces, she is almost more alarmed about them stopping. In this case, the AR Team taking the urgent call about ST AR-15 breaking out of detention. But the unknown reason is frightening to Destroyer.

Dreamer, meanwhile, puts the screws on this even further. Destroyer is making desperate calls for evacuation help, and Dreamer makes a surgical series of taunts at her. Destroyer is expendable, and might by and large be cheaper to replace than retrieve. Her mind is backed up after all, so Dreamer could just spin up a whole new Destroyer. Who would have no memory of anything happening right now. A new Destroyer would never know if she was used, abandoned, and left to die. Crying and alone.

And Dreamer’s suggestion, perhaps, this is not the first time they have had this conversation.

This pairs extra well with the earlier moment of the redeployed G43 joining with M4A1 and her team. G43 tells M4A1 she has no memory of what happened in the opening episode. But she has been informed about it, and trusts her.

Dreamer and Destroyer show another side to just how important an emotion like trust is worth. 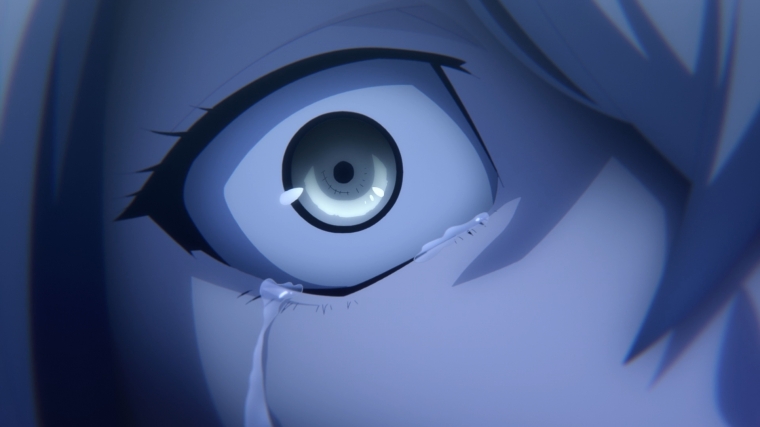