Outfit from January and February 2022.

Which, for a video game which celebrates PSO 2 Day on the 2nd and 22nd of each and every month, makes it quite the special year. Classic PSO 2 will have its tenth anniversary. New Genesis will enjoy its first.

There will not be a more special PSO 2 day for 200 years.

I will also post a writeup of every prior outfit, and a set from every photoshoot I did for them. At least ever since I had access to English localized servers back in 2020. Future ones as well, of course.

Because it amuses me, yet is also important to me.

I get to share various passing memories, as well as have an outlet for something else to add to this website I own.

If I have been taking these outfit photoshoots for multiple years on these servers, it more than counts as a hobby. Besides, as you will see from the outfit dates: I only really change costumes once a month at most. Sometimes longer. Like this one.

With all the celebratory stuff scheduled to happen in the year ahead, I thought it would be fitting to pull out a look reminiscent of a casino dealer or bartender.

Working off my experience from this time last year, I wanted something which could serve multiple duties. I wanted it to suit New Year’s, as well as Valentine’s Day. With February in particular being a month with the first round of concert events in New Genesis, with Naderah in Retem, I want to look nice for the shows. And of course, the first occasion for us to get to kick off a major scale Dark Falz caliber boss fight.

And with my status as a Frontline Essential Worker: I wanted to make sure the look could carry this without me needing to mess with it for a while.

So, the hope was some tailcoat skirt action and bow-ties could save the day.

A quirky thing about the inner tube emote: because of how emotes in general operate, it only works when the character is standing. So it is quite possible to deploy the emote, only to find yourself positioned well above the water.

Finding a location with just enough of a shallow end to stand in, while also providing enough height to give the illusion the inner tube is floating on the water, was a bit challenging.

Far more than the surfing emote I used in August for my previous summer look. I did not need as much surface coverage there to sell the illusion.

Wanting to flop down on an inner tube in an oasis after all of… well, everything, is an important sentiment. 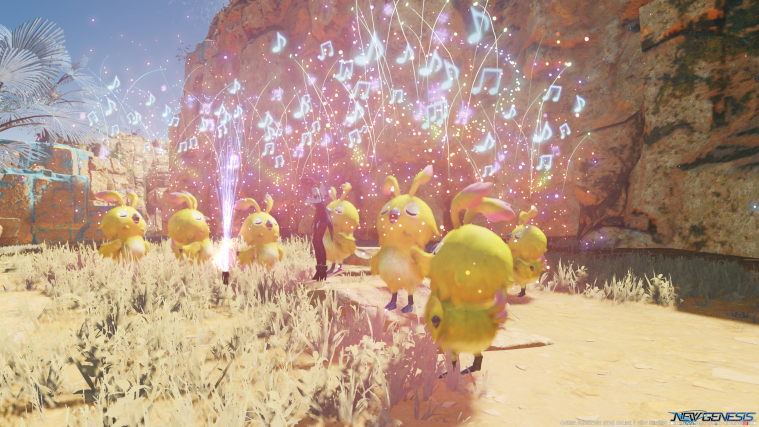