[The following is my contribution to the Anime Secret Santa 2019 project, organized this year over at All Geeks Considered. Always consider reading the others!]

Nowadays, whenever I am forced into a group situation which requires everyone present to “Tell Us Something Interesting About Yourself,” I default to the following:

I have studied and/or worked on every continent except for Antarctica.

When I was in high school, I had no idea what I wanted “To Do” with my life. I was very good at the process of being good at school, mind you. I had a full slate of Honors and Advanced Placement courses year after year. I had my extracurricular activities. Anime Club at the local library was neat. But there was also Debate Class and its associated trips to perform Model Congress simulations. Year-round Stage Crew for the school theatre program. I was also assigned a gauntlet of religious stuff as well. Everything from national youth conferences to being tasked with teaching confirmation classes. Countless other incidentals, or we would be here all day. Endless Resume Building Obligations.

I hated this so much.

When I researched universities to apply to, my top priority was to get away. Not even “across the country” away. Far and away. I could care less which majors they had. I wanted all the study abroad programs I could leverage. I felt I had a window I could exploit.

So I ran as far as I could.

I mention this background because I am quite familiar with the various personal dilemmas faced by characters in A Place Further than the Universe. It seems all kinds of life doors are beginning to shut before it ever felt like they were open to begin with. Abyssal terrors start darting around inside your mind making awful suggestions about how you are running out of time. You blew it. Forever.

A Place Further than the Universe aired in 2018, produced by Madhouse. Series Composition duties were handled by Jukki Hanada (Bloom Into You, No Game, No Life, and Love Live!) with the series helmed by Director Atsuko Ishizuka (No Game, No Life and The Pet Girl of Sakurasou).

This is my first real experience with a series by Ishizuka. Her previous headline directorial works have been in the light novel to anime pipeline which is often outside of my wheelhouse. I knew their sales were solid, which is a credit she can deliver results which satisfied an often fickle adaptation market. But that about covers what I knew.

Hanada’s writing output is something I have become quite familiar with however, as their resume boasts a range of situational comedies and light dramas I have enjoyed. That the two had worked together adapting No Game, No Life prior was also interesting. A Place Further than the Universe has no such source material, so I hoped going in they had the opportunity to grow their collaborative efforts and push themselves. Set out towards something they may not have been able to do before.

As far as putting my own personal passport sized approval stamp on the project then: I feel they succeeded.

The series follows four high school age girls on their journey to Antarctica. Mari Tamaki is a well meaning but often absent minded sort, who feels a need to find exciting experiences due to a vague sense of her lazy days dwindling away. Shirase Kobuchizawa lost her mother to a previous Antarctic expedition, and now possess a burning drive to go there herself. Hinata Miyake is a high school dropout working at a convenience store. She sees the frozen continent as a way to break up her routine, to shake her up before taking a crack at university entrance exams. Yuzuki Shiraishi has been a child actress all her life, with no friends to show for it and views the expedition as yet another spot on a long list of endless, miserable booking assignments. At first, at least.

There are plenty of actual adults with them along the way of course. Even with a boatload of modern technology, a trip to the bottom of the world is no simple task. But this core group is the emotional center of the show. And it is important to note: they do not know each other before the series begins.

You may be familiar with the notion of how traveling with others can let you get to know yourself and your partner(s) in new ways. How you handle the unexpected together is a potent cocktail. You are playing mystery shots offering unlimited opportunity for great connections or absolute nightmare conflicts. 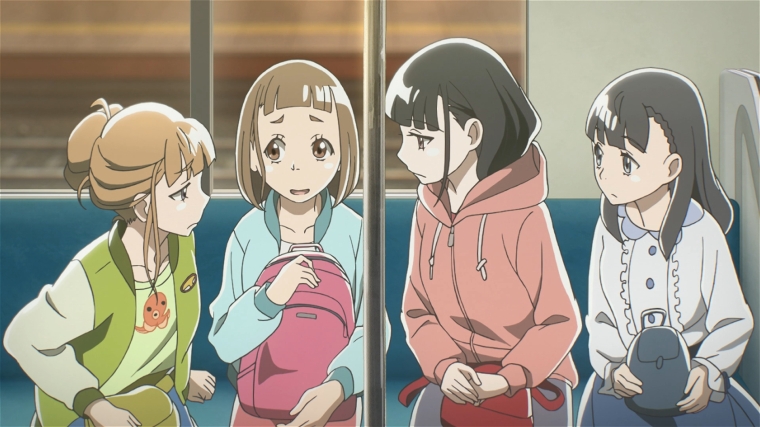 A conundrum the series does have is trying to stuff its episode count into its travel luggage.

With thirteen scripts of less than a half hour each, if you look at it on paper A Place Further than the Universe has an extensive amount of ground to cover. The girls need to go from from being complete strangers to getting approval to join the expedition. They need critical training for an inhospitable environment. To say nothing of the process of getting to the boat in Australia, plus the time spent traveling from there to Antarctica. And I am sure you hope there are some episodes left to cover the characters personal reflections and the needs that brought them all the way down there.

And this is just a top level A to B to C plotting. Which then brings up the crucial need that all this needs to happen slow enough to let the character situations breathe.

This entire operation fails if the viewers can not enjoy the human element of seeing the cast connect and bounce off each other. We need to care about them on some level to care about the trip.

Where some shows may commit to an entire training arc, here that subject is sliced down to about half of one episode. Effort is taken to perform time skips toward the departure and speed us along once the trip has been secured. I welcome this, as I have no reservations about the mental jump of “the girls learned orienteering [and we can discover if someone slacked off].” I much prefer a show of this size budgeting more time for us seeing the cast off to the Antarctic. Keep in mind I also appreciate how shows like Sweet Blue Flowers will make similar judgement calls. As an example, that show does some hefty skips over a calendar year to track highs and lows of the character relationship arcs over time, rather than the day to day.

Too many times have I seen a promising journey for a show bogged down at practice camp. Or worse, the characters twiddling their thumbs at school. 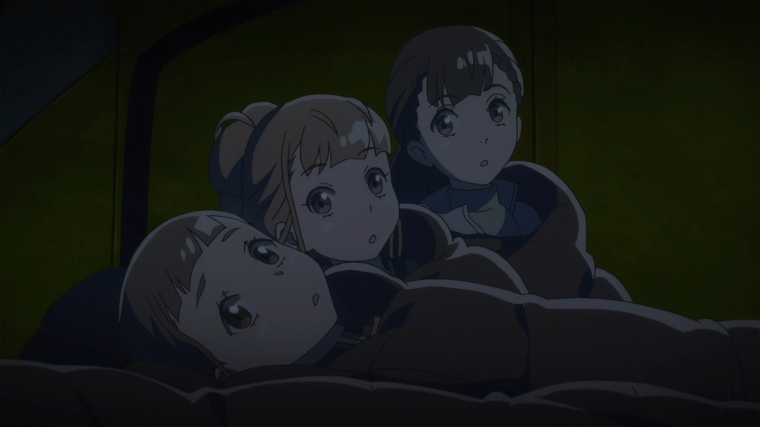 Having more time for the characters to spend on their trip and bounce off each other has a strong synergy with the visual style of the show as well.

The main girls are elastic. They will stretch like pizza dough, they will cry as if their tears can fill water balloons. Emotions are on their sleeves. They are full of energy and life, each with scattershot personal direction reaching for… something.

It stands out more and more as the group continues their trip. We are going from Tokyo to one of the most desolate and hostile places on the planet.

The adults around them, be it at home or away, have far more defined and predictable physical structure. If not outright hard limits. Even when blackout drunk or trying to massage a testy phone call home, no adult is ever quite putty in the way the lead characters can be any given minute. It can be cute and funny to see a character waggle around like a wet noodle while trying to be sly about something, to be sure. But the thematic contrast of their place in all this is striking. It sends an ever present visual reminder of how unmoored the girls feel from the rest of the world. I would find it hard to believe it was unintentional. They are stretching, they are searching, they are growing.

None of them wanted to be where they were in life.

So much so that even the prospect of literal Antarctica, a landscape which can and will kill you without a second thought no matter how cute the penguins on television are, has a tricky time seeming like a real place.

The pressure of their decision to go can not weigh them down or hold them back. Because it is still an escape from the life they are coming from.

I recognize that feeling on a rather visceral level.

I suppose I did manage to reach the future after all.