And Hachiman would’ve gotten away with it too, if it weren’t for those meddling kids and their dog.

[The following is one of two posts of my contribution to the annual Anime Secret Santa Project organized over at Reverse Thieves. Always consider reading the others!]

When trying to wrap my head around a piece of media, I always have to consider the peculiarities of time.

The time when something saw release. The time I am experiencing it in the present. The time I spent in other worlds or ideas beforehand, and the orders in which I came to them. If I have been in a position like the characters, and if so how does that manifest.

Young adult media can be prime for this in particular. Thinking back now on the big fish in tiny ponds from when I was younger, which at the time can seem like the entire world. Also, what may have once been an everyday part of my environment, getting away from it, and coming to see that past normalization in a more heightened light.

While a successful series of light novels and manga first, the My Teen Romantic Comedy SNAFU anime began in 2013. Which, as it turns out, puts most of the cast to either already have or be right on the cusp of graduating high school in 2017.

I graduated high school a little over a decade ago.

2017 has been quite the exhausting year.

The setup of My Teen Romantic Comedy SNAFU has our leading man, Hachiman Hikigaya, forced by his teacher to join the Service Club.

A friendless antisocial loner, self righteous in his perceived pragmatism to the extreme, the hope is he will be able to connect more with others. By hearing out folks who come to the Service Club with their troubles, and working to assist them, perhaps he will grow as a person. To achieve an emotional or social education, things beyond fulfilling the letter of one’s school assignments. The Service Club has only one preexisting member: the smart yet also short on outward emotions Yukino Yukinoshita. From here they collaborate among themselves and others to solve the matters of the day.

Fitting for characters who are so often either avoiding, berating, or otherwise obscuring what they are trying to say, dialogue is the primary if not the sole driving factor of anything SNAFU wants to do. Brain’s Base is a studio I tend not to associate with lavish production values, and that trend continues here. I view them with more of a workmanlike output, where things are more aimed to get done than to be flashy. It is very rare for this series to make use of complex shot compositions or extra animation for a bit to make a point. Which is not much of a hurdle for a series which spends most of its time with characters talking around school. Compare this to something like Brain Base’s own Cheer Boys, and the stumbles its gymnastic antics ran into. Intentional or not, it lines up with the lopsided if not single minded at the experience of all else personalities and priorities of the lead character.

Betting the farm so hard on dialogue without, say, a Monogatari visual safety net does lead to a high risk media gamble. If it ever stops working, the floor would cut out from under it and the series left in complete and utter free fall.

I have heard a lot of things over the years about My Teen Romantic Comedy SNAFU. My Youth Romantic Comedy Is Wrong, As I Expected. Yahari Ore no Seishun Rabukome wa Machigatteiru. OreGairu. And all the other ways folks have represented the social media word count busting title. And I heard a lot about the writing, and the quality dynamics many praised it for. Different ways viewers may or may not identify with Hachiman shutting himself off and self hatred denials based on their own high school experiences. How folks cheer for him in the different directions to either break away from or even embrace his hateful loner lifestyle.

But something I was not expecting was Saika Totsuka.

Saika is a character with an androgynous appearance, who Hachiman mistakes for a girl at first.

Saika corrects this, emphasizing that they are male and wishes for treatment as such. Again. And again. And again. Hachiman continues to view Saika as a daydreamy girl, sometimes in his own mind and sometimes he ends up saying something out loud Saika has to deal with. After Saika’s introduction, the series takes a detour for a minute or two in numerous episodes so Hachiman can have an over the top Wacky Gay Panic style monologue with himself. Which adds up to be quite a bit of material over the length of the series.

Especially in the year 2017 has been. I never know when states are going to ram through new bathroom laws in the dead of night, when the President goes off to try to unilaterally ban folks from military service, or any number of things.

That is not the fault of the show. But as a matter of timing, coming to it now does mean certain parts end up grinding me even harder than it would have four years ago.

SNAFU as a series wants to make some interesting inroads about Hachiman fumbling past relationship attempts and shutting himself down. How deep over corrections for past disappointments or cruelties done by others can create problems for years to come. A lot of the cast have damage in ways the show is clear to show, and how those damages are multiplicative to oneself or others around them. Hachiman’s loathing, fear, and resentment sabotages himself more than anyone else in his present life. How that plays out with the two primary romantic options of Yukino and Yui makes for a lot of sideways movement and backsliding. Not an unmoving status quo, but even trying to claw back what was once a status quo. Hachiman has someone leaving him in quiet solemn tears on more than one occasion. Going into a deep overdrive to try to cut them off and push them away processed as the optimal choice.

Getting stuck in familiar ruts because they become comfortable is a running theme with a lot of the series. And it can be a resonant thing to see, if you saw or were like any of these characters when you were younger.

But this also carries on to Hachiman having his near episodic extravagant meltdowns over thinking a boy is cute. And the series could do something with that, if it wanted to.

But for any nuances one may see in all the other writing in the show, those panic jokes are more exhausting the third time than they were the first. The sixth more than the the third. And so on. They never evolve to anything more. No new reflections or realizations. They are mere punching bags deployed in the name of weak Romantic Comedy.

The series is so dedicated to running that same tired playbook time and again, despite all the care or attention it shows to others.

It impacted my overall enjoyment of the series, though not to the extent as when the very fun and enjoyable Muromi-san decided to shift and bank on a colossal series of nosedives. But how much I could never trust SNAFU in full to not have the floor cut out from under me about this sort of thing at any moment was never far from my mind. 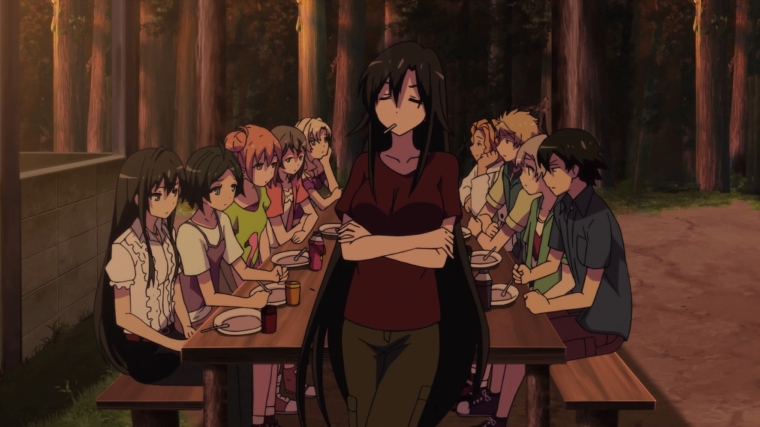 Something I reflected on a lot while going through SNAFU is some of the other high school social loner anime works from its class year.

2013 was the time of The Flowers of Evil (Aku no Hana) and No Matter How I Look at It, It’s You Guys’ Fault I’m Not Popular! (or WataMote), for instance. The Flowers of Evil is an atmospheric time following a small town guy who positions himself in his own escapist mind as a champion for ‘twisted’ figures like Charles Baudelaire. What ensues is a destructive chain of events that unfold as various airs and lies catch up with him. WataMote is laser focused on an internet and video game fueled young woman with devastating social anxiety and reactive hatred for mainstream society. Despite how much she also wishes to be popular and loved by members of the same.

The Flowers of Evil went on to be my favorite anime production of that year, which I will still stand by. Meanwhile I have warmed more to WataMote over the years. I think going through both of them was quite draining, even a season apart and week to week. And by all means I would not advocate a marathon of them.

Both productions turned out to be dire sale under-performers, to say the least. Despite the success of their respective manga neither has seen the light of another anime form since. SNAFU’s anime sales crushed the both of them combined, with plenty of room per volume to spare.

I can understand why. SNAFU cuts a kind of middle path between the two, in my eyes. It forgoes ambitious direction choices like the ones Flowers of Evil used, but maintains writing nuances for its multi character cast. The series also has more otaku attractive features and characters than WataMote pours into its force of nature yet nerve wracked and baggy eyed main character.

Hachiman is also never punished quite as hard as the leads of either of these works for his behavior, which I imagine helps a lot as well. The show itself does make eyes towards Hachiman’s reclusive worldviews being harsh and wrong, and folks trying to filter goodness out of him. There is a deep sadness within him. But never so much that folks who are more agreeable to his dismissive lines of emotionless lone wolf-ism and Beep Boop This Is How Human Society And The World Works logic would flee.

I was a regular on certain anime forums at the time this series was first airing. I remember the folks who loved Hachiman as an icon. And what the growing internet hate movements of the last few years allowed them the room to openly cheer on as many of us were driven out.

While one would never ever say he was popular by the end of the show, Hachiman is at least on speaking terms with far more characters than when he started. Which also puts him in a better social position than the leads of Flowers of Evil and WataMote. The gambit his teacher made shows some dividends in his forward momentum and positive progress in some areas.

I am glad to have seen the series, as I do feel it forms such a good trio with the other two aforementioned shows. They all came out almost on top of each other, and are grappling with similar concepts about misfit if not resentful folks on the social sidelines. Meanwhile their executions and priorities are each different flavors of these experiences, so no two are the same. I am confident one could watch all three, and form a very good roadmap for what kinds of specific creative choices hooks them in television and film. Each corner in such a triangle pulling in their own ways.

And someone is going to find themselves drawn closer to one more than another, and another less than that. Perhaps no matter how hard that one may try.

A Situation which is Normal, but in the moment it still feels All Fucked Up for the one who may feel left behind.