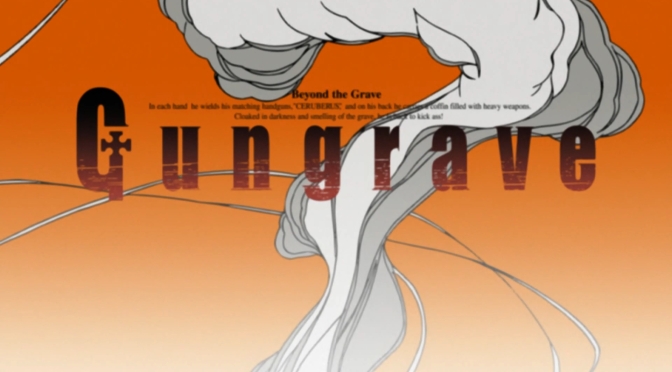 “Let’s get rid of every ounce of whiskey in existence.”

[The following is the second of two posts of my contribution to the annual Anime Secret Santa Project organized over at Reverse Thieves. Always consider reading the others!]

Being a teenager in the anime boom years of the early 2000’s was a wild and topsy turvy IV feed beyond our wildest fandom dreams from the 1990’s.

Anime, boosted off Pokemon and the after school runs of various shows via Toonami, was huge. We were getting lots of old licenses, newer series were releasing faster and faster (even within the same year as Japan!). And it had knock-on effects in the floodgates of manga and video games.

This runaway party would in time prove destructive and glut the market with junk anyone who did not go out of business is in some cases still stuck with. But it was a gold rush time where near anything was being brought to market, and in some cases they would hit paydirt. I doubt a very niche little game like Katamari Damacy would have ever seen a western release in the 90’s. And at its $19.99 retail price it struck a huge chord with Japanese media loving but often broke teens. It had stock problems for a long time, trying to meet demand.

The original Gungrave video game was positioned as The Next Big Thing by Yasuhiro Nightow. His work on Trigun has been finding perpetual audiences in the west for over two decades now. And by all means in the early 2000’s we were much closer to the epicenter and wake of its impact. While a stylish but hyper short combo driven character action experience, it still saw the follow up though Gungrave: Overdose. Which went to a similar well Katamari tried via an aggressive western pricing structure ($14.99, brand new). It even saw release in the same months as Katamari, each hitting Japan in March and each out in the USA in September. This was also timed to be within months of a full twenty six episode anime. All three of these products released within 2002 to 2004.

You can not say there was not a hell or high water commitment to blast this to success or die trying. It sure took a few years for Blood Blockade Battlefront to come around after, at any rate.

Heck, I bought Overdose at the time even without ever playing the first game. And 2017 has been a very busy year for a franchise asleep as long as this one, with two whole video games via Gungrave G.O.R.E. and Gungrave VR.

Given the themes of the anime I never picked up from the deluge of other DVD single volume releases of the time, it feels appropriate to look back to the past before moving forward. 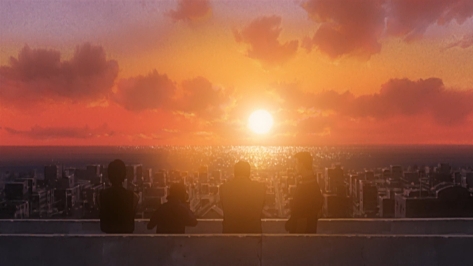 The Gungrave anime follows a very atypical series of creative choices for an adaptation of a running and gunning video game. Particularly games which got enough review flak for being so short that you could beat either one in less time than it would take to watch this series.

The series establishes the fast back of the box facts. Beyond the Grave (once known as Brandon Heat) is a (un)living weapon of a man in a near catatonic state. There is a powerful organization known as Millennion led by a one Harry McDowell. Grave has been sought out by Mika, a desperate girl on the run who only knows of Grave’s hidden existence via the stories of her now dead mother.

And then this plotline… stops for a long while.

A significant chunk of Gungrave takes place as an extended number of flashbacks. All the way back to bright eyed Brandon and Harry’s teenage days in a street gang around town with their friends. We move forwards from there with some addition time skips as one event leads to another. We know Harry will at some point come to take over the Millennion organization. Brandon has to go through what will cause him to become Beyond the Grave. Mika has to come from somewhere. And so on.

Grave is sidelined for a long time in his own namesake show. Brandon starts out nowhere close to the kind of ruthless gunplay ability one would perhaps be hankering to plop down to see from the anime based on the rampaging antics in the video game. It takes more than an entire season of episodes to even get back where the first episode began.

It is an ambitious choice for what in most cases would be a rather trite adaptation job. The series is content to dwell on multiple years of hardships, mafia political conflicts, backstabbing, counter backstabbing, and other rise to power story beats. The friends who we know must go separate ways, but how and when and why.

While I may not do the series any favors by bringing it up, right from Gungrave’s opening I was also reminded of the original television series for Hellsing. They are very close in age, musical range, and a lot of the action choreography has similar kinds of style emphasis. A lot of styled shots of someone doing something like cross armed or blind shooting in one frame, and then smash cutting to someone on the receiving end of the rounds. Downward pointing weapons and extreme closeups of deranged faces. That sort of thing, which also saves the effort of blocking out a more dynamic full frame battle.

While Hellsing ran right off the rails in due time as it depleted story material and hit Gonzo’s usual difficulties past initial episodes, Gungrave survives through its extended focus on the flashback plot. While plenty of fights do occur in this period, including events required to have Brandon showcase later skills and end up reborn as Grave, they do not need to escalate as fast.

It seems almost upside down for a work based on an action video game, which may as well be the length of a roller coaster if you include the line, to have so much story. But it does not surprise me Director Toshiyuki Tsuru has served most of their career as a key animator. They maximized the use of the tools available and spread action around so the production did not outright collapse.

It doubly does not surprise me how how the Series Composition duties of Yousuke Kuroda would see them performing the writing work for the eventual corrective action of the Hellsing OVA series. 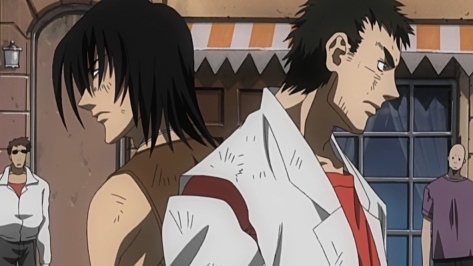 A knock against Gungrave if a viewer does go in expecting The Next Big Thing From The Creator Of Trigun (or Blood Blockade Battlefront) is in the ensemble cast.

This is very much the story of Harry and Brandon/Grave. Who they used to be and what they used to want. Who they became and who they ended up as over years and years. Characters like Mika and Maria never establish themselves quite as well as folks like Meryl and Milly in Trigun, despite all the alliteration among the group.

Brandon/Grave is also a man of few words throughout much the series. It is rare for him to get a solid resonant volley of interactions with anyone outside of a fistfight or a hail of gunfire, especially early on. Even in his gentlest seen days of youth and his time with Maria, Brandon is more the type to give a kind smile and nod rather than heartfelt words. Having experience with the video games years ago helped me with this aspect of his character. I expected his portrayal to be about as such. But we have also gone a long time without a Gungrave game. I would not expect potential modern audiences looking to pick it up to be prepared for his particular use of the lead character slot.

There are stoic protagonists, and then there are (near) silent protagonists. While the later is still around in video games to various degrees and even effectiveness, it is not too common to see them adapted in such a direct fashion for twenty six episodes of far more passive media.

So anyone going in today would be well served by bracing themselves for that in advance. 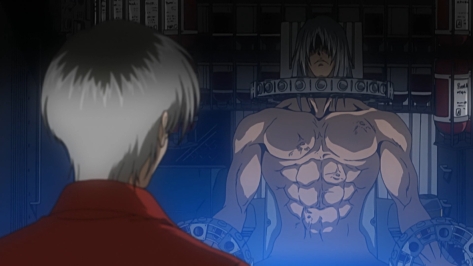 I went back into the Anime News Network archives to see what was being said about Gungrave in the anime DVD singles days, as I never knew anyone with it at the time.

While statements like “The first volume of Gungrave was like the slow, introductory three minutes of a Beethoven symphony” are perhaps more poetic than the kind of reflective consideration it would receive today by many, I do think it holds together to a surprising degree. While hype and hyperbole were being hurled around to both praiseworthy and dismissive degrees at the time for anything in the franchise, it does carve out a solid little spot for itself. In particular if one knows some of the quirks of the series and what they are getting into beforehand.

An anime adaptation of a video game where story is almost the furthest possible thing from the focus of the source material, and turning this on its head. What by most measurements should have been a forgettable snooze with some kaboom alarms punches a few degrees above its expected weight class. And it holds up better than some of the defining action anime fan phenomena of the day (ie, that original Hellsing series).

It may not outright blow the doors off anyone, especially those not accustomed to the stiffness and haziness of digital work of the time. Gungrave is both a few years after the big industry transition from lovely painted cels and a few before the strides of works such as Black Lagoon in the action anime digital endurance department. Which is especially rough as screen resolutions keep ballooning past some of the most expensive possible consumer televisions around in Gungrave’s day. You might want the discs on the cheap to save any bitrate you can out of the picture data. But Gungrave was big, solid, and reliable start to finish.

Which I suppose is exactly what you want if you are going to all the trouble of waking him up. 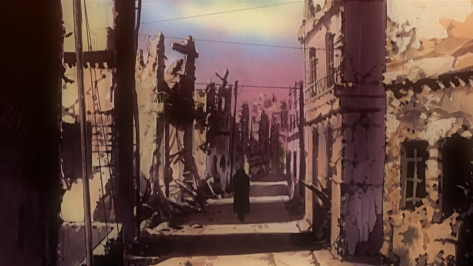