This Week: A Piece of Phantasmagoria.

“While traveling the realm of dreams, I discovered the little planet “Phantasmagoria.” This has been a small story from that planet.”

About a year and a half ago, I wrote about Shigeru Tamura’s 1998 short film Glassy Ocean (Kujira no Chouyaku).

While he is an illustrator by trade, I also mentioned I would in time write posts on his other animated works adapting his fantasy locales. Chief among them, Ginga no Uo Ursa Minor Blue and A Piece of Phantasmagoria. So many months having gone by is eons by internet standards. It may as well be ancient history, or a long lost reminder to a forgotten aspiration.

Phantasmagoria is an old world though. A place of giant light bulbs half buried in the desert sands called home by many a fish. Where some buildings know how to walk, and so they travel to stave off stationary decay. The stars hang out in bars, and a larger than life projection machine lights up the night sky.

So perhaps it is not a matter of being late.

To the people who live on Phantasmagoria, who would be able to know for sure either way.

A Piece of Phantasmagoria is a fifteen episode anime series from 1995. With each consisting of a several minutes long short, the collection is about the size of a feature film.

Animated by the eponymous Tamura Shigeru Studio, the illustrator serves as director and more. While Glassy Ocean (as well as Ginga no Uo Ursa Minor Blue, for that matter) zoom in to tell tales from specific locations in his fantasy picture book planet, A Piece of Phantasmagoria is an anthology. The breadth of this world, and the facets it contains. Each episode is, true to its name, just a small part of a larger whole. One story going on in one of the many locations which rise up from the surface and reach out into the blackness of space.

This is an ominous, but not inappropriate, framing.

A Piece of Phantasmagoria is one my favorite animated things, although I am not sure what I would do with it if I ever made a list of favorite anime. This is similar to my relationship with 1999’s Gestalt (Heya/Keitai), or even the much more recent Nimrod when trying to write about them. Where they are operating in such different, extreme arenas that are a bit trickier to give crystallized voice to. Which is at least one part of why I have been kicking this particular can down the road for so long.

Another would be to have many other posts written down here on this site. To provide various contrasts for folks to browse, long before making such statements. To have already covered the likes of Naohisa Inoue‘s Iblard Time (Iblard Jikan), for instance. A painter granted directorial powers to lead us on an animated tour through their gallery worlds. Or Yōji Kuri’s The Midnight Parasites (Kiseichuu no Ichiya), a kind of safari through a hellish (to our eyes) alien ecosystem.

Phantasmagoria is a mood piece, like either of those and so many others.

Part of what I enjoy and find so many degrees of appreciation of is in how the work goes about the mood groove it settles in on.

Its world is a visual treat, to be sure. Lots of influence from old French and Belgian illustration for its sights of fantasy. The screenshots here perhaps best able to sell this as the kinds of ideas one may have in daydreams or deep sleep.

But Phantasmagoria is never sold to us as a wonderful escape.

Our stories are, at their most emotionally active, melancholic at best. The work obsessed with the mundane, even while it could show anything else in the entire world.

A worker at a rainbow paint factory fearing looming layoffs, and how they wish to spend their days. For as mentally delightful the idea of a sky projector is, it is a lot of lonely work for the employee operating it. Phantasmagoria is a world where we visit and revisit several bars and liquor depots. Even a whole town built around where literal alcohol spirits play. And at least one someone still makes their living crafting bootleg whiskey. They dodge police pressure. They sell to those same shops we have seen stories in via other lights.

In conversing with a buyer who suggests laying low for a bit, our nameless whiskey maker thinks nothing of it.

“These things happen,” is their only reply. 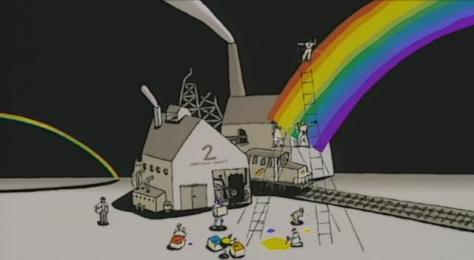 Lest I get too far ahead of myself, A Piece of Phantasmagoria never paints its world as a bad place to be.

Characters are engaged in all manner of activities, but the people themselves are not argued as negative. Not even a whiskey bootlegger, or a character deciding to take a journey which may end their life. These are normal things, insofar that they are things which happen. Everyday things, somewhere out there.

Scenes are framed a long distance away from just about any and every action. We never see the likes of quiet personable smiles as found in the larger Glassy Ocean short film. We do not get so close. Everyone is smaller, and far from such intimacy. It is almost like watching a play set play out without ones own involvement. What kind of world would be operating there, and the kinds of normalcy it would settle into.

The sights are only fantastical, after all, to our own eyes. We do not live there.

This is something I have thought about a lot as I have traveled around our own world. Forget any high in the sky philosophical applications, it is practical to remember. I can be half a world away from my bed, and as unreal anything may seem to me it is the everyday experience of those around me. It is a crucial thought to not treat foreign places like some kind of theme park, after all.

This does not take any enjoyment away from the world though, far from it. We have so many different views on what is normal slamming into each other at all times. So many ways to see and meet and experience.

What one sees melancholy and senses of longing time and again in A Piece of Phantasmagoria. At the same time though, folks are also traveling and seeking. They are drinking and eating with others from all walks of life. We see how news moves, from the conversational to screenings in theaters like in older days. For all its visual flights of fancy, the series remains focused on

The migrating pterodactyls are attacking Cookie Town again, trying to steal monuments. Tomorrow will be hard, but there will be whiskey in the basement. We can have campfires on a green glass ocean and mine its surface for fish, and perhaps trade with others. Perhaps there are stars who smoke cigarettes to deal with the stress of looking for a lost parent.

Maybe we will go out tonight, to take our mind off heavier things.

Phantasmagoria is a large little place, with a whole lot of fantastic sights and tales to see and tell in it.

Tamura has done everything in their power to never shy away from the seemingly boring parts of such a place too though. How the locations people live, what they see and know, become normalized.

Speaking only for myself, I find it all rather relaxing and hopeful.

The idea of going to a seaside bar in a crystal city full of robots, star people, witches, regular humans, walking cactus folks, and more? Fantastical and exciting, yes, on every level. There would be a profound novelty to that. To could have sold such ideas to me all by itself.

A Piece of Phantasmagoria also gives me the normality of it all though. There is not anything unusual about these scenes. No heightened musical scenes or sweeping key frame animation for maximum impact. Which in a roundabout way allows it speak to the sensibilities of it special qualities all the more. It reminds me of myself, and days I have, and how I may see myself or my place in this world.

In thinking of any and all the most fantastical, amazing moments of my life so far, there is something of a common thread.

At the time they felt like they most natural thing in the entire world.

Yet I know I have been to a lot of unusual places. Stories that sound from incredible to impossible when shared. Just as I have felt when hearing amazing things from the lived experiences of other people.

And I think A Piece of Phantasmagoria, as quiet as it is, loves that particular feeling in those moments when people are sharing in the world together. 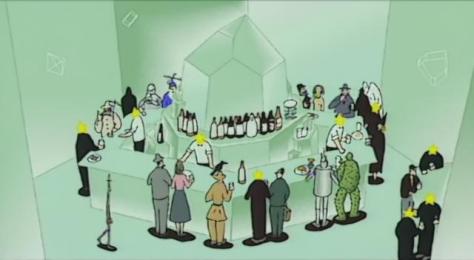 Mothballs write-ups are of already completed anime I have either removed from my backlog, or have revisited. A crash space for my immediate thoughts and personal processing, these are not intended as full reviews.