A series which should not be, investigating life forms we can not see.

(Part five of a six part series featuring my favorite anime productions of 2014; consider reading the others!)

All good things must come to an end.

It is an old saying, and yet eternally apt when it comes to media. We physically can not create and consume off into forever, even if we we particularly enjoy a select franchise or property. There is only so much than can or will ever exist. As a general consideration, a series concluding when it is still strong and poignant is much more preferable to it running well past the point of exhaustion and obligation, only to sputter to a close regardless. We will always have the memories, the ability to revisit, and imagining what could have been makes for a nice enough dream as we move on with our lives.

Sometimes, things try to boomerang around again to recapture that magic. And it almost never works out. The production circumstances too different, creators at a different point in their lives, and we ourselves having changed in our own ways as well.

But every now and again, as if emerging from some ethereal mist and driven by some primordial force of nature, things work out. 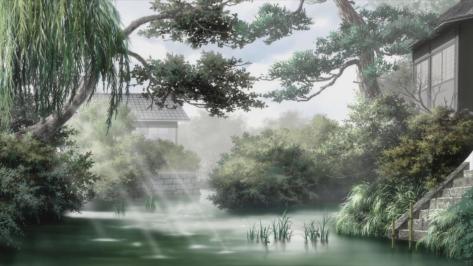 Mushishi has for years been an internationally renowned and multi-award winning manga by Yuki Urushibara, running from 1999 into 2008.

We follow the explorations and investigations of a white haired man named Ginko. Effectively a traveling medicine man as well as having his own interests in furthering his studies and understanding of the world around him, his wooden backpack contains all manner of remedies and potentially helpful support documents. However in this world, a loose floating time somewhere between the Edo and Meiji periods, his practice is a bit more than solving the common cold or chicken pox. Ginko, as well as others like him, are able to see what are known as Mushi. While the word can literally mean “Bug,” here it is used to denote an even more basic form of life. Below that of even plant and fungal life, and below bacteria and viruses.

Primitive and primordial on a level where they could be considered something akin to the forces of life themselves, and to the average person may as well be supernatural beings. In certain circumstances, a person or other living people can knowingly or not encounter a Mushi and have it latch on to them. It may even bring about seemingly great benefits, such as the ability to assist with calling the rain or the stamina to cultivate fields at any and all hours of the day or night.

But, they are often parasitic relationships in various ways.

If all that sounds somewhat on the melancholic or reflective side, you would not be off the mark. The anime adaptation which ran from late 2005 to the summer of 2006 was met with similar critical acclaim to the manga, thoughtfully weaving its episodic tales of rural lives and naturalist edges. Director Hiroshi Nagahama and his team at Artland were celebrated for carefully crafting atmospheric qualities befitting everything from navigating wooded nights to the pained tension clouds in a room when someone is advised by Ginko to make the most difficult kind of choice they may ever have in their lifetime. A quiet series, confident in its strength to never need booming musical cues to tell the viewer what to feel. Thoughtfully and thoroughly storyboard, so that when the viewer entered a village or other residence with Ginko the locations would come across like a place that had been there a long time. Part of a world, that we were exploring and learning with Ginko as well.

Perhaps most prominent of all, this consideration and immense regard for the source material would led to things like the last several episodes coming out months after the effective end of its regular run.

It was thought better to be thorough and complete, rather than cut corners for air dates.

This matter of incalculable respect, both for the original publication and for the viewers time and attention, is an essential part of the experience with Mushishi -Next Passage-.

The series returned on January 4th 2014 without any big series of pre-release announcements. No trailers. No long held promises in convention speeches. Rather, a special double length episode, “The Shadow That Devours the Sun” just arrived. As if the series itself had been afflicted with some time perception altering Mushi, everything was the same as before. Artland was back in the animation production seat. Hiroshi Nagahama was directing. Ginko, and in turn Yuto Nakano as his voice actor, was walking about the countryside and smoking his clove cigarettes just as he ever was. As he had continued in our minds and hearts, though now also on a screen before us.

With the special came the built-in ending announcement of a full second season, set to air in April. As the rare production hiccups would occur, rather than rush the episode out the door with the consideration it would be fixed for the home video release, the series would just take some time off to finish things properly. The same with using a further August special, “Path of Thorns,” to cover what would have been episodes eleven and twelve of a normal broadcast schedule, and the next ten episodes airing during the autumn season managing to take advantage of most of a summer off to release on time every time thereafter.

All the while, it was as if we never left all those years ago. -Next Passage- has the advantage of coming out much further in the development of digital animation tools and high definition television service as a standard, so they do look a little unavoidably different. But it becomes the kind of difference in seeing a familiar world with new eyes, even if we rarely ever cross character paths again after their short stories conclude. Ginko’s presence and roles also feel at least a little shifted as well to fit the stories selected for adaptation, allowing even ever so slightly more room for the episodic characters to breathe life and energy into the show.

Or, perhaps that too is a matter of my growing older and how I am processing what I am looking at. But it feels right, not just as a postulation on the structure of the episodes but as a thematic link as well. We had a few episodes in the first season looking more at Ginko’s life and past that lead him to his nomadic journey, with no particular destination in mind but for learning, helping, and aiming to balance what was once uneven. He is out in the world meeting people, but his story of aiming to assist where and how he can with his abilities is but one part of the lives he touches along the way. This was true in the first season as well, and Ginko stepped back on multiple occasions to allow folks to reach their own conclusions based on his recommendations. But there is the hunch that we get slightly more seconds per episode where Ginko may be off screen, out another room, or having departed to meet up with characters again some time later.

We are able to see their stories by virtue of following Ginko all this time, but Ginko himself would have the respect to know that his story is not the most important one to be told.

To be sure, these are stories I was convinced would never be seen in this format.

A hiatus of almost a decade is for all purposes a lifetime when it comes to entertainment media in general, and especially an area that can be as fast paced as anime. When Mushishi arrived on television screens and home video all those years ago, the entire industry was still in a seemingly unstoppable boom period due to western fads and an influx of fast cash practically not seen since Japan’s 1980’s juggernaut economy. In the time since, numerous shifts have occurred. Multiple companies have been rocked to their center, if not outright cored out due to bankruptcies and the like due to the ensuing fallout from the anime bubble implosion. Things really only stabilizing on some fronts rather recently.

Consider also how Hiroshi Nagahama’s previous project, the similarly atmospherically drenched (though radically different in its intent) The Flowers of Evil (Aku no Hana) was met with an internet firestorm of resistance. Calls for boycotts and dire disk sales, due to how he and his team at Zexcs selected to adapt it from its source material. To go for something ambitious and unsettling via the rotoscoping process, to achieve its mood through both warping the reality of live action performers while also hyper applying detail to the universe around them. To seek the feelings of being lost, alone, and the crushing desperation of a youth.in turmoil and flux.

And he achieved that goal, for me anyway, as The Flowers of Evil was my favorite production last year.

And the popular response of revulsion towards it also achieved its goal, greeted as the series was with aggressively low sales.

That Mushishi -Next Passage- exists at all is all the more remarkable in that light.

How one can return after something like that, to not only pick up where one left off but to be as proficient at in it the same ways as before.  A little older and wiser to be sure, but It is a very Mushishi thing. To be able to recapture the same heart they once had and to deliver it with the same respect for each and every person who had ever lent it theirs.

Mushishi Special, “The Shadow that Devours the Sun” is streaming via Crunchyroll.

Mushishi -Next Passage- is streaming via Crunchyroll, in addition to Hulu.

Mushishi Special, “Path of Thorns” is streaming via Crunchyroll.