Even seemingly endless days must, inevitably, come to an end.

During the summer of 2011, I went on several international field studies as a part of my graduate degree program.

One of them was to the rainforests of Costa Rica, to stay with and learn from various indigenous communities which would be impacted by the El Diquís Hydroelectric Project. A colossal government agency undertaking set to cost over two billion US dollars, under current projection it will be the largest facility of its kind in Central America. In the process though, it will flood hundreds of hectares of indigenous territories and displace those who live within them. One absorbs a lot of perspectives even in a small amount of time staying in such places, listening to how they view their situation. The prides in being able to stall the immense construction project for as long as they have, the quiet acceptances of considering the potential dwindling days of their communities upon this land. The considerations of where they would go, should the worst case scenario finally come.

Rainbow-Colored Fireflies is set in a Japanese community where their legal challenge options have run dry.

A government dam project will be evicting them from their village in a month’s time to flood the area.

Backing up some, lest I get too far ahead of myself, Rainbow-Colored Fireflies follows the story of Yuuta Otabe.

A twelve year old boy, and his father had passed away in a traffic accident about one year ago. A recent enough setting where one of the possession kept by Yuuta and carried with him wherever he goes is the old cell phone his father once used. He is on summer vacation with his mother, in the mountains and near to where he has some lasting memories of quality time by an old dam he and his father had spent hours at before. Mountains, being quite treacherous at points, gives Yuuta enough pause and consideration to give up his sports drink to an exhausted elderly man in the woods. Thankful for the drink, the gentleman remarks to be mindful of a coming storm.

Yuuta is not mindful on the way back to dinner with his mother. All things considered, due to the ensuing weather circumstances, he should be dead.

He instead comes to find himself over thirty years in past. The village that in his own time under an artificial body of water, but full of residents as it once was even in its dwindling days. The last month of the community, and in turn his summer vacation there and those he meets along the way

In execution and general flow, many of the direct frames of reference a viewer would consider pulling from comparing Rainbow-Colored Fireflies to other anime fall squarely in the Studio Ghibli camp.

As is the case in films like My Neighbor Totoro, there is no primary antagonist or enemy being faced by Yuuta and his new community of friends. There is effectively nothing to overcome in the direct sense, in that our protagonists already know the community as it exists now is coming to its conclusion. Little left to them but to enjoy these days that remain. and indeed the cast is encouraged to do so.  To play and appreciate their connections, that they may culminate in a great festival tradition they wish to upkeep one last time. Environmental threads for elements like the dam, the titular rainbow fireflies, and more do of course exist.

More than any Miyazaki romp through, the single production Rainbow-Colored Fireflies reminds me the very most of is Isao Takahata’s Only Yesterday (Omoide Poro Poro). With considerations aside for how that film is centered around a woman nearing her thirties looking back on small snippets from her childhood days, while Rainbow-Colored Fireflies outright transports Yuuta to a similar time period, commonalities between them abound. Fundamentally they are each slice of life looks back on places and people long since past, merely with necessary adjustments for framing.

Yuuta, after all, is still in the process of living this summer vacation, though he is also very much out of his time. 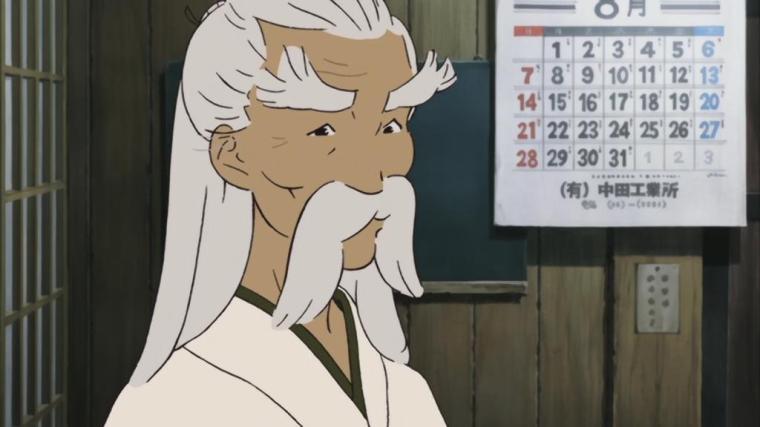 Rainbow-Colored Fireflies is a 2012 film based on a 2007 novel by Masayuki Kawaguchi.

Unlike what can often be the case in circumstances like this, he in fact has quite an anime resume under his belt. He is a well traveled Director of Photography specialist, having navigated such responsibilities in series like Fruits Basket, Simoun, and perhaps most notably all four series of Maria Watches Over Us. He has done a lot of excellent professional work when it comes to lighting, camera tricks, and other qualities in series environments featuring watercolor and sketchbook backgrounds.

Information related to the production process, technology, or overall goals involved in animating Rainbow-Colored Fireflies seem limited in English language circles. While the following is conjecture on my part, what seems to have occurred is Director Kônosuke Uda (Galaxy Express 999: Eternal Fantasy, One Piece) and his team at Toei Animation took these traits of Kawaguchi’s anime work history and inverted them. Which is to say, rather than shooting around watercolor backgrounds, the characters themselves are what similar aspects and their associated lighting, shading, and so on are applied to.

It is really among the better approximations of what the visual style of this piece is shooting for. It is not 3DCGI, that is for sure, despite looking when presented in still images like it may be cel shaded or a crazed mix The Flowers of Evil meets Peeping Life.

The film does not commit to the light watery style on the same level of warbly etherealness as, say, The Tale of The Princess Kaguya (Kaguya-hime no Monogatari). But, in exchange, it seems to have slightly picked up some of the anchoring solidity of Ukiyo-e woodblock printmaking sensibilities (though keeping with a more modern look). What one ends up with is this cocktail of rather minimal but vivid linework, strong and clear visual imprints when characters are going through slow actions, and contorted colors and wildly warping proportions when running or the like.

It is quite an effective style, as far as I am concerned. With how few lines that make up most characters and the general limited to nonexistent shading, there is a large emphasis on seeing them move. Something as simple having tea or enjoying lunch has a prominent sense of moment to moment presence. The eye of even a general viewer is drawn in more to follow the more individual strokes that makes up an arm moment, as that can often be when most of the action is happening in a given scene.

In a film where the lead characters are very much on a clock until the festival comes and the village will be retired beneath the stillness of an artificial lake, I feel there is a thematic strength in that. 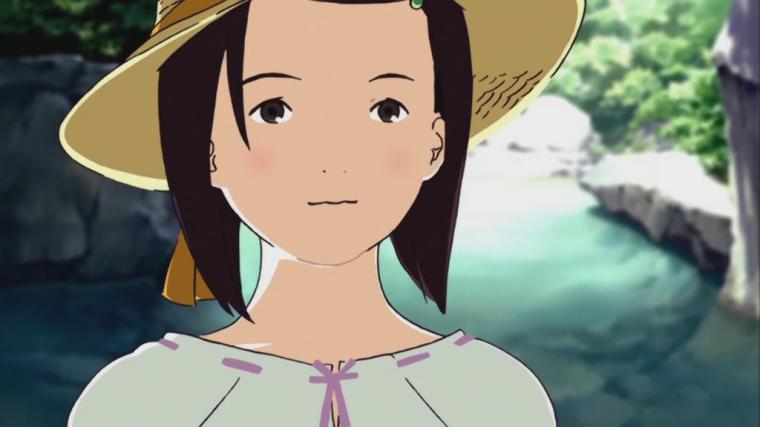 So the film has a strong sense of style going for it, and I can greatly identify with the scenario of the community at hand. It is also a very recent movie, so one would think it primed to have been on the tip of the collective anime internet community tongue.

Yet it slipped so hard past the radar it is barely even in the top four thousand of the MyAnimeList.net popularity algorithm.

One way to attribute this comes down to it being a marketing conundrum. It evokes enough calling cards for folks to think of Studio Ghibli, but even they have a hard time making a splash when neither Miyazaki or Takahata are on the marquee. Audiences are generally wary of potential gimmicky also-rans. At the same time, Kônosuke Uda’s resume wheelhouse does not provide a whole lot to pull from. 1998’s Galaxy Express 999: Eternal Fantasy aside, a lot of his work has been in places like his over two hundred fifty episodes of One Piece or in more recent series he have surfaced titles like Majin Bone. As a quiet and often slow series of countryside days and interpersonal connections, Rainbow-Colored Fireflies is not a film one can slap “From the Director of One Piece!” or the like on the poster and expect good results.

The other side of this same coin is that while Uda has never really been at a loss for projects, this very much is outside of a lot of his usual work. And unfortunately, that shows through. Especially near the end.

As a summer vacation of many small moments and the times shared that become big moments, Rainbow-Colored Fireflies falls into the kind of narrative zone where a viewer can increasingly peg different points for the story to satisfactorily stop and the credits to roll. The last ten to fifteen minutes in particular is a series of events which feel a fatal combination of important, rushed, and punching outside the weight class of much of the rest of the film. It is an unfortunate move, as it is a chain reaction of circumstances and aggressive editing decisions which I can fully see causing a general theatrical audience to go from feeling emboldened to do word of mouth marketing to rendering the experience as “Well, it was nice I guess.” The movie either needed to have more time for the ending it wanted to go with (and I can see a vision for this being as grand as I feel it was intended to be), or it needed to end at one of several points a few minutes sooner.

It perhaps sounds like a nitpick, to put so much emphasis on only a few minutes. But in execution it truly did feel like a lot of wind had been taken out of its sails, so radically does the scale of its ambition increasingly outpace what it is equipped to drive home.

Does it kill the movie completely? Well, no. There is still an entire film prior to all that, after all. But that so many of even the limited reviews of this film which do exist, and even quite positive ones, mention an unsatisfying to hedged sensation in how the ending played out does seem to indicate it struck a widespread chord of concern. It introduces well placed potential doubt factors in recommending the film to others right at the finish line it did decide on.

As a side effect, it looks to have drained the grassroots community momentum it likely could have received a real swell from otherwise. 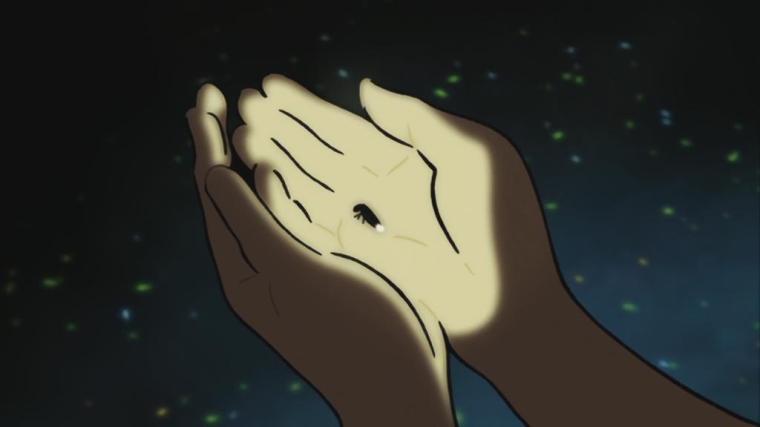 Rainbow-Colored Fireflies: The Eternal Summer Vacation is by no means a bad trip.

The bulk of it is quite solid and much of the experience even refreshingly understated as what is essentially a time travel story goes. Very few productions look anything like it, so there is commendable value in having it as a part of one’s visual reference library as well. There is a lot in its favor.

There is always something of a danger in gearing up for a grand whirlwind finale to a summer vacation. It is a romanticized element in a lot of films, to be sure. But to an extent this film feels like what happens when one had such a good thing going, but fumbled the execution of their pie in the sky dream send off to the season. The sort of thing we have all done in our own lives, where one can not quite look back on that time without thinking of their embarrassing faceplant at the end. And there are enjoyable memories in this movie, pleasant distant days on borrowed time.

That time just happens to sadly run out somewhat short of the credits, before the movie realizes its spell was broken.