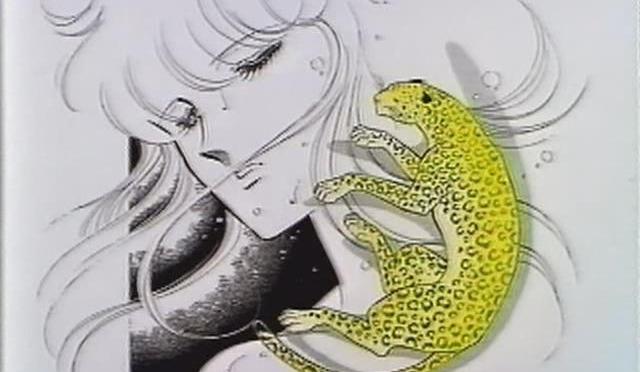 A lycanthropy-leopard lady, and loves lost or located.

Sometimes I worry if I bring up production credits too much (or not enough, depending on your view), though I do fancy the transformative tales they can weave as their own little quirky stories.

As I type this, the Mizuho Nishikubo directed Giovanni’s Island (Giovanni no Shima) is under consideration as part of a twenty film shortlist for nomination to the 87th Academy Awards in the Animated Feature Film category. While he has had a long career to the point where Nishikubo was an episode director on nearly half of Rose of Versailles, and a celebrated Animation Director for his work on Patlabor 2: The Movie and the first Ghost in the Shell film, his full scale Director roles often have not landed him anywhere near as much notability. They can at times be at least classed as conceptually interesting experiments though, such as collaborating for the Mamoru Oshii written Musashi: The Dream of the Last Samurai.

Purple Eyes in the Dark is a shōjo manga series by Chie Shinohara, running from 1984 to 1987. The story follows a teenage girl named Rinko Ozaki, who possess a strange birthmark on her left arm. Over time as she has grown and the mark has darkened, she has picked up additional curious senses, such as becoming increasingly fascinated with the smell of blood or her eyes glowing the titular purple in the dark. After a threatening late night streetside encounter however, she goes one step further and finds she can turn into a leopard. Her assailants are eviscerated. From there the narrative follows Rinko journey to discover the secrets of her genetic makeup, romantic threads with a childhood friend, an increasingly suspicious biology teacher, and so on.

Purple Eyes in the Dark would go on to win the 1986 Shogakukan Manga Award in the shōjo category (Shinohara would also win again in 2000, via Red River). While not a universal lock for a later animated version, such an award more than helps push the case to a wider set of potential investors if one wanted to pitch such a project.

And there sure was a lot of money sloshing around in the 1980’s anime industry from all kinds of folks. 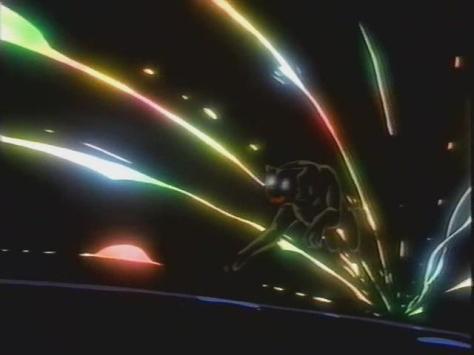 Mizuho Nishikubo’s animated take on Purple Eyes in the Dark arrived as an OVA in 1988.

The manga had already wrapped up, so the complete narrative package was already out in the wild. As the animated version was a co-production between Toei Animation and Youmex, and further players like a Toshiba EMI partnership, there were a lot of seats at the committee table. True enough to Nishikubo’s career history as a full Director on a project, the final product is indeed quite a novel little ball of string to paw around with.

The roughly thirty minute long Purple Eyes in the Dark OVA tells the complete story from the manga… as an uninterrupted chain of music videos.

Now heavily musical anthology videos are nothing new to animation of course. I imagine almost anyone who would have made it to this corner of the internet has probably at least seen Disney’s Fantasia, after all, and even contemporary anime of the 1980’s had the likes of Robot Carnival. But a tricky part of Nishikubo’s video is that the entire thing is designed to tell the whole story I laid out above. In about the space of a half hour, one has Rinko struggling with raw meat, family, love life, and associated events that may befall one after dark when they are a leopard in the big city. With no audio dialogue (but sometimes manga panels with limited text may appear as part of a montage), the viewer is instead guided by pumping 1980’s synthesizer and bass tracks, and a rotating door of lyrics to set the scene, mood, and emotion.

Visually, it more than looks like a high budget music video of its era.

What we would now consider rather blase if not outright cheesy video effects are out in full force. Three dimensional cube with all its sides having a frame on them as it rotates away and the scene transitions away. The video twisting one hundred and eighty degrees on a horizontal axis. That one move when scenes already seen in a music video are repeated again, but as a battery where there are four separate videos playing at once in different corners of the screen. You know them and the rest of their editing family well if you have even ever done so much as a cursory late night music video streaming site binge, let alone if you actually grew up or lived when these effects were common to the point of being near inescapable on television due to their heavy use in the music industry world.

Combined with that comes a further two pronged assault. On the one hand, the video features ample still images from the manga, promotional artwork where appropriate, and other relatively static bits. On the other, there is a fair amount of well animated scenes for big felines on the run, point of view shots down the street complete with turning of corners, and so on. In an attempt to bridge these all the more, the manga panels do at points get some limited effects applied to them as well.

Blood splatters are deployed for them several times, and scenes involving shootouts make use of bullet projectile effects and associated flashes being fired from manga panel firearms. 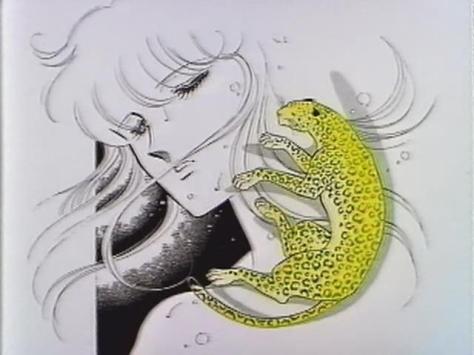 Throw it all together, and one gets a curious cocktail of music and visuals trying to tell a storyline outside of the normal weight class of its running time.

Given, I am not convinced it manages to stick the landing either. Without full original animation backing it up, it becomes easier to fade out a bit more during the more stationary and montage scenes of promotional illustrations, cover art, and the like. By the same token, as these are themselves also storyline bits, at least having even a general synopsis idea of what the narrative is supposed to be about is almost essential for a more positive viewing experience. Even something as “simple” as Rinko standing alone in her kitchen holding a package of raw steak takes on a different level of understanding if one already knows what she is struggling with, rather than needing to piece together her leopard tendances on the fly and in the moment.

Saying the OVA would be for fans of the manga only though does also seem something of a disservice. In anime form Purple Eyes in the Dark does not age gracefully, but it does function as a very dedicated time capsule to the music video format of the time. This was the decade of the burgeoning development of Music Television, after all, and a whole lot of experimenting and ambition was flying around there already even in the live action realm.

Some of that spilling over into the anime industry, and trying to experiment with using what is effectively a television episode length music video to condense down a twelve volume manga in less time than a traditional movie approach is no crazier in context than a lot of other stunts being pulled in its day. 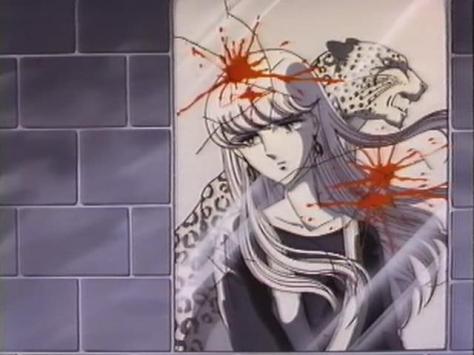 At its worse, Purple Eyes in the Dark could strike someone today as being bloated, confusing, and outdated.

Alternatively, some may see it as full of quaint, cheesy video effects but in the light where it so thoroughly embodies a very specific music video production era long since past. I am still edged more towards the latter of these, even with my reservations regarding its flow, making a large number of assumptions for audience information, and the like.

Leopards and other large cats running through rainbow light tunnels to thumping 1980’s electronic bass tones falls into that area where I have a stupid grin on my face more than anything else, and there is a value to me in that.

On a larger scale though, the experimentation he did in Purple Eyes in the Dark may have been more influential to Nishikubo’s later work than a lot of what else one could attribute. Even well into the 21st century and a whole new millennium, Musashi aggressively juggles multiple graphical and animation styles, and even Giovanni’s Island takes sharp moves to have elaborate fantasy sequences veering in and out of a post-World War II drama about the Kuril Islands dispute.

Regardless of if the Academy of Motion Picture Arts and Sciences throws Giovanni’s Island a bone for the upcoming final round of five, one has to wonder just how much Mizuho Nishikubo may have been bitten by Chie Shinohara’s cats all those years ago.