Despite the title, this OVA sure does enjoy the snooze button.

Financial resources are a critical backbone supporting virtually any given business endeavor, and the anime industry is no different.

Part of why I and many others enjoy poking around 1980’s direct to video Japanese animation ventures is because the national economy was booming to an extent where almost anyone who could cobble together enough staff and wanted to make a project would be in the running to probably get an OVA off the ground. This was especially true if you already had something of a name going for you.

The Original Concept credit for 1987’s Good Morning Althea is Ichiro Itano. Instrumental to the famed missile swaps, extravagant contrails and sweeping camera following their every arc within 1982’s The Super Dimension Fortress Macross to the point of the effect being dubbed the “Itano Circus,” he achieved rapid fame as a key animator and animation director. In turn, that he would get involved in various direct to video projects over the decade is of no surprise. These would range from various roles on the three Megazone 23 videos, Battle Royal High School, directing the notorious Violence Jack: Evil Town and playing multiple key creative roles in the infamous Angel Cop.

Of these, I would say every one of those aforementioned works etched more of a memory into the collective consciousness of anime fandom than Good Morning Althea.

Though the reasons for that become ever more curious.

If one going into viewing this project with the awareness of Itano’s creative involvement, a lot of it comes off almost like the OVA itself was a vague backwards engineered Macross bootleg toy.

Humanity was at war with an alien (but humanoid) race known as the Crest. In this case however, the struggle dragged on for hundreds of years, eventually resulting in a victory for the Crest. There are inroads for coexistence and integration though, as while there are tensions humans are able to go through a naturalization and body modification process (which seems to involve a complicated and power granting tattoo, well, crest). Our primary male protagonist, a human named Galory Cherrowick, is one such individual and has limited psionic powers to boot as a result. While the Crest have psychic powers however, they used a suite of autonomous machines called the Cfutz during the protracted war. The machines, as might be expected, are still posing a significant problem as they continue to operate independent of outside control. Most of this is covered in little more than an opening text crawl, the OVA otherwise launching the viewer right into an active battle between Human-Crest space forces and a ship commanded by the rampaging Cfutz.

This might sound like a natural means of getting one into the action as quickly as possible, and eventually come back around and be relevant again after a lull in the initial hostilities. Potential threads for some national identity issues (particularly with a character like Galory), or even some sort of trinity messaging between mind, man, and machine. This need not even be done as high concept philosophical shenanigans, as even some broad strokes popcorn populism between the battles would be more than suited to a roughly fifty minute run time and give it a narrative grounding.

Good Morning Althea quickly downs its cast to three main players: one being Nikolai, the muscle and resident anti-Crest of the group, as well as a native Crest in the form of the titular Althea. And I do mean that quite literally: Althea’s most significant scene is a near six minute long full frontal nude sequence after she is woken up from stasis by Galory, as he and Nikolai need her to fight back against the Cfutz. Considering that this video does not even run an hour in length, this is a substantial amount of time where characters basically try to explain to Althea information we as viewers just saw already. As most of the rest of the OVA involves a non-stop action barrage, aside from one other small incidental scene on a bed later on, this is also just about the most amount of face to face character development Galory and Althea have between each other outside of combat. As might be expected, the work does make an attempt to sell this as a story driving romantic pairing.

In a vacuum, this itself would not be the most devastating thing in the world. Near nonexistent plot and few but weak characters can at times work out to be more preferable than a narrative wreck attempting to cram in way too much and far too many players in too little time. Given the setup, and its failing elsewhere, everything regarding its success or failure comes down to how it executes on a runaway train of mecha action sequences.

And it outright crumples under the pressure.

I brought up the matter of money at the start of this not only as a means of setting the stage.

Indeed, Good Morning Althea has a contingent of skilled key animators, and on top of that Moriyasu Taniguchi served as Animated Director and Hiroshi Ōsaka as Mechanical Director. Ōsaka would even go on to be one of the co-founders of Studio BONES in the late 1990’s, which has a reputation for many rock solid animation achievements. While the reputations for some were still young at the time, there are a lot of very nice key animation frames in this OVA, especially as far as the mecha are concerned.

The problem is twofold however. First and foremost the in-betweening, and what will generally make up the vast majority of what one is looking at in a given animated sequence, is all over the place in quality. The Anipages take on this OVA goes into far more detail on this front, but even as more of a layperson regarding the specific quirks of various animators throughout the decades something went fundamentally wrong here. There is a consistency problem in that the in-betweens tend to wobble around or otherwise fumble various details from one frame to the next, resulting in an appearance which oftens not only feels cheap but ever so slightly disorienting in motion. And not, I am sure, for intentional thematic reasons and a deeper reading of the piece. Resources were very clearly underfunded here, either directly through the outsourcing talent used or more roundabout like a schedule scramble which could have been hammered out with more money for time.

On top of this, Good Morning Althea is not directed by Itano himself, as one might suspect for a project of this variety. Rather than his particular eye of the era gunning for visceral and dynamic camera motion in combat sequences, we have Hideki Tonokatsu. Perhaps even at best known in western circles in this capacity for the much later Silent Möbius television series (given that it received some broadcast play on Tech-TV in the USA), most of his other productions in this role are in other forgotten OVA’s like Happy Lesson and Hyper Speed GranDoll. He never carved out much of a niche for compelling action scenes. And this was Tonokatsu as his much younger and less experienced self. Near as I can find, while he had various Episode Director roles over the years, this was his first full fledged Director credit. It would be almost a decade before he had it again.

One gets a sense Tonokatsu was not supposed to originally be in this production chair. While I have nothing to back this up in particular, he appears to have been swept into something way over his head as one watches Althea, Galory, and Nikolai pilot their mecha against the Cfutz threat. Many exchanges play out with the camera firmly planted on a certain unit, who then fires or otherwise fights something off-screen, and then a cut to the receiving end of that action (such as a machine exploding). While perfectly useful in moderation as part of a larger action choreography diet, once one picks up on how often this keeps happening as standard operating procedure the sense of how loose and distant all the action feels really sinks in.

There are very few solid back and forth blows, or scenes that otherwise sell a palpable weight and impact to the struggle of battle. Which is a problem, when fights make up so much of the content. 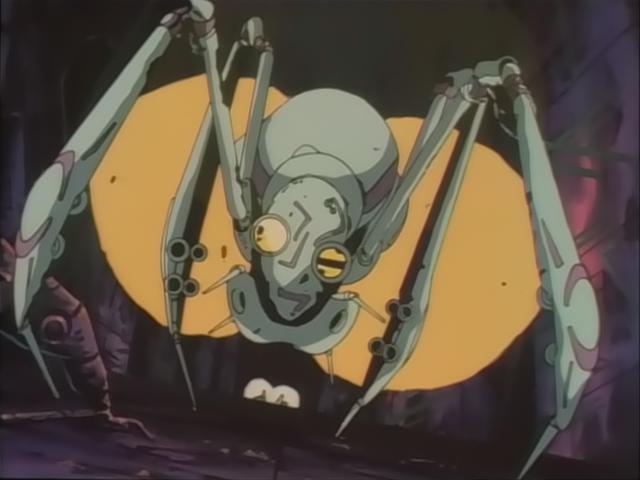 What we have then is an OVA whose original creative force seemingly left the project to work on plenty of other things instead.

We are left with a work which is structured at its core to be almost entirely reliant on that one man’s particular variety of solid action shenanigans. Talented key animators are present, but under-budgeted or otherwise mishandled  in-betweening work does them little justice in motion. The director himself getting hurled into something seemingly beyond his depth, and possibly brought in out of emergency necessity. Then trying to simplify the visual direction and action cinematography matters down, when that would have been its strongest selling point at the conceptual stage to begin with.

And to a degree I feel for Tonokatsu in that respect, as the finished product comes off far less like a passion project than the air of something that dearly needed to just get out the door. But, workplace sympathy aside on a personal level, as a piece of entertainment media the OVA  has little going in its favor.  Good Morning Althea lacks nearly any compelling reason to watch it, outside of general anime archeology and poking around industry history for folks like Ōsaka.

A whole lot of people probably wanted to stay in bed when they were working on this.