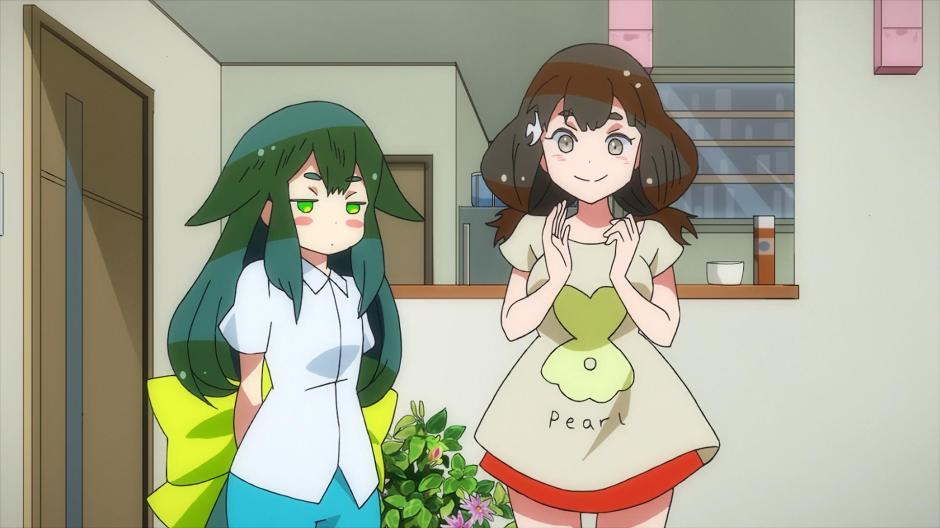 The Sentai Filmworks home video set of Gatchaman Crowds has been making the release rounds, so I thought it would be topical all these months later to go over the director’s cut version of what happened in the last episode of that series.

Note: This episode is not included in the current aforementioned set.

Almost a year ago, I wrote a long post going over what I saw in Gatchaman Crowds.

To sum up thousands of words into a much smaller statement, its very particular viewpoints on what actually makes a superhero, especially within a modern social media context, I found to be immensely enjoyable and dearly appreciated. As someone who went to graduate school for peace studies and conflict resolution, Hajime Ichinose as a character is in many respects a walking avatar I can point to for pretty much everything I paid a whole lot of money to be able to get a degree in. That she wants to know the perspectives of her enemies, how to build community support structures, and the ways through which everyone gets to be superhero.

It was a delightful work, and the most outright “I would want to theme a birthday party after this” fun I have had with a piece of superhero television or film in quite some time.

Something I never really brought up in that prior writeup though, and something which has been known to show up in multiple reflections from others on the show: the final episode, in the form it aired in, can feel kind of inconclusive towards a few of the core matters of the show. There is the sense that, yes, there was a lot that wanted to happen here, but some definite emergency cuts had to be made.

So series director Kenji Nakamura and co. went back and did it again.

The new version of episode twelve contains roughly fifteen minutes of new animated and narrative content. It will be impossible for me discuss them at length without spoiling some of what happened both in the original cut and this revised edition, so spoiler safety locks are more than off for the duration of this post.

One of the most paramount things one can see applied between the two episodes is their narrative focus. The previous version, entitled “Collage,” has a wide lens. The general Crowds rioting, OD fighting Berg Katze when the latter bursts into J.J. Robinson’s meeting room, the gamification solution to the situation at hand to bring folks together under a collective competitive goal, and so on. It is an appropriate title for the episode as it was, all thing considered, particularly in conjunction with how previous names used in the series are along the lines of “Kitsch,” “Avant-garde,” “Futurism,” and so on. Collages are contain vast quantities of expression and artistic intent, tend to be taken in b the viewer at a distance, but can also be a bit of a mess.

“Embrace,” the director’s cut version at the heart of this post, implies a significantly more personal and zoomed in approach. That when viewpoints, be they artists or otherwise, there are still just people. Specifically, then, separate in word tone but well selected to address the motivation dynamic of Berg Katze’s dastardly activities throughout the show and what on Earth our superheroics advisor Hajime wants to do about him now that all else is said and done. It is the primary issue, really, from the version of events in “Collage,” where Katze just gets frustrated with how everyone is getting along and warps out of sight in a fuss. Then a few scenes later at the very end Hajime is talking to herself about going to the beach, and Katze is angrily spitting venom as if he was a ribbon accessory on her shirt.

With no on-screen idea how this character situation got from Point A to Point B.

It is an important distinction in intent and drive, as this is not merely significant cleanups but an entirely different area for the camera to be paying attention to.  While also assuming the viewer has seen what came before.

To draw a very cursory comparison, consider Neon Genesis Evangelion and End of Evangelion. The final episodes of Evangelion are famously introspective, and for many even today outright confusing, while the latter film is a theatrical length movie by and large showing what is going on “outside” during that time. One can, if they are so inclined to make the mental hoops to do it, take parts of both the television and film version of the events that are occurring at the conclusion of that series and sew them together as a combined unit in their head. “Embrace” can be taken on a similar, but far less complicated, level. As things stand now, “Collage” is just a thematically different take on everything going on around Hajime and the Gatchaman, while “Embrace” almost completely glosses over things like OD and Katze’s big throwdown in favor of more of what Hajime got up to.

To wit then: We have Hajime making fresh NOTEbooks to distribute, meeting and greeting fans of the Gatchaman, and so on. The cell phone call she makes to her mother just to hear her voice again and say she will always be herself, while being exactly the same scene between the two versions, takes on an entirely different tone and quality here. Previously, it could be seen as a more casually triumphant thematic bit; the metropolitan area saved, the community brought closer together, and she has reformed the entire Gatchaman team and taught them what superheroes are. And she did it, well, as herself. As a character, as a person, she had self-actualized with everything she ever needed to be a hero before ever even receiving a NOTEbook from Robinson.

Here, the scene is placed right after a melancholic sequence where the team wonders if she has been depressed recently or has something on her mind underneath her exuberant exterior. It is also directly before meeting up with Berg Katze, destructive mischief maker extraordinaire, for a date she had asked them out on in even the original “Collage” episode. Here we see the same events in a different tonal light, as there is far and away more potential doubt, confusion, and need for her to make a grounding reassurance of personal intent to someone.

This gets back to the matter of perspective lenses I have mentioned. Hajime’s mother, who we have never seen but comes up at times, would have likely heard the first emotional interpretation of what her daughter was telling her. It is not like Hajime was one for keeping her Gatchaman powers underwraps, encouraging the team to make their own internet web video channel, visiting young children at school, and talking to press and politicians. Miss or Misses Ichinose would have been, I imagine, inclined to see the phone call as just a random reassurance that being a Gatchaman and all this has entailed throughout the show has not changed her from being true to herself. In our second crack at the material, our mental sight is more where Hajime’s own is, despite none of the shot composition being altered. That there is this apprehension, or consideration of what meeting up with Berg Katze could result in and what it may do to her.

The act of needing to at least hear herself speak her intentions to retain her personal nature to someone before she heads off to make a big topsy turvy event for all to see.

This I feel, really, is what gets to a demonstrable core of so much which transpired throughout Gatchaman Crowds.

The actual date, meeting, showdown, whatever one would want to call the physical internet video streamed public conversation between Hajime and Katze, is a plot beat sure. And a necessary one, to get us to the “Let’s go to the beach tomorrow!” scene conclusion each version of the episode share between them. To have Hajime kiss Katze as herself out of her Gatchaman uniform, and to force the essence of what they as an antagonistic force are into her heart when she is in her superhero costume to use it as a containment unit during the strained affair. In essence, the most exhausting and physically draining thing she has done in uniform, to put a villain of the entire community if not the entire universe in a position so she will always be able to talk to them.

Katze’s incarceration are extrapolated forms of working towards transformative justice and transformative learning. Many of the needs of the community have been met, through our antagonist is also not to be left behind in all this. Were we operating within the criminal justice system, it would be more of an aim towards restorative justice. But given the powers involved, operating outside of the courtroom forms a much more practical and hands on approach that suits Katze’s emotional needs as a perpetrator. Katze is not obligated to agree with Hajime (indeed, the Katze within her heart takes ample opportunity to curse her and tell her to die). But the process of perspective sharing without judgement, which Hajime is personally equipped to provide in spades, is in many cases crucial in efforts like these to achieve total justice.

Does Gatchaman Crowds: Embrace only exist because of some production crunch issues that arose during the original series airing? Of course. Does it stand on it own? Of course not. Does it fully replace the version of the finale which existed before? That, I am not so sure I am willing to commit to. I think the exercise of watching both approaches is useful, in how they take their individual steps to the same conclusion and what was prioritized in each. What the creative team was going through on both occasions, and how the scheduling differences made for two very different kinds of entities looking at the same thing.

And so much in this series does come down to the call for understanding others and perspectives.