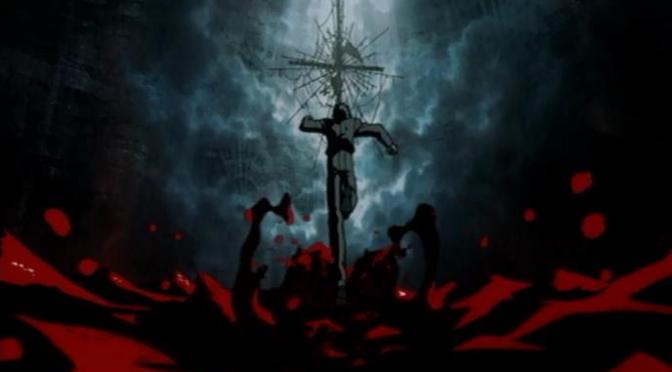 Part two of a three post dive into the anime adaptations which tie into CLAMP’s global destruction versus forces of salvation tragedy series.

Placing the reasons those already familiar with it know all too well aside (and I will shortly get into myself), on a raw production level it seems like something that should not exist. One rubs their eyes, thinking someone was intentionally messing with the credits or other relevant data. But, no, everything is indeed how it seems.

The director for this film is Rintaro, whose presence in the professional anime industry stretches all the way back to him being an in-betweener on 1958’s Hakujaden, the first full color anime film. He was seventeen at the time, and has gone on to direct phenomenal works of character craft and cinematic excellence (such as his directorial film debut via 1979’s Galaxy Express 999 movie, or his take on Osamu Tezuka’s Metropolis in 2001). He is also known for making massively overloaded structural failures, such as 1983’s Harmagedon. He is very much a coinflip director, who historically tends to be either incredibly “On” or shockingly “Off” his mark. It is said he still has a film coming out for 2015 (B’t X: The Movie, unrelated to CLAMP’s work this post series is about), and in that respect it is a real wonder and matter of great respect he is still in the game at age 73 given the history he brings with him.

For those who have not seen this film, you can imagine which side of the coin Rintaro landed on this time.

The film is a narrative apocalypse, and not merely in subject matter.

Rintaro also served (with CLAMP’s team director Nanase Ohkawa, as well as Mami Watanabe) to provide the screenplay in addition to directing the movie, a manga adaption for a series that had only been running since around the middle of 1992. With the film debuting only four years after the fact, to say nothing of the production time while it was actually being made, there was just not a whole lot of source material to work with. In this respect Rintaro had significant leeway to forge new paths.

However, this involves needing to prioritize between the sizable cast of personalities and the significant violence the series is known for.

The X  manga concerns itself with numerous eschatology concepts, ranging from Christian apocalyptic narratives, Gaia theory, Buddhism, and many others. Its tale is one of predestination and the struggle against one’s own fate, as specific individuals aligned with the seven Dragons of Heaven (those who seek to protect the Earth and humanity as it is, flaws and all, come the end times) and the seven Dragons of Earth (those chosen by destiny to wipe humanity from the planet, so the Earth can be reborn and be vibrant once again without the sins of mankind).

Those forced into this struggle come from various walks of life. Monk. Family salaryman at a publishing firm. Computer genius. Call girl. Government Ward Office employee who processes marriage forms. Human clone. Seishirō Sakurazuka and Subaru Sumeragi from Tokyo Babylon. Among many others. Divided along these lines, they strain against or flow with the hands fate has dealt them, as they are all pushed into a savage series of events that will see many of them brutally kill each other (whether they want to or not). All this, with CLAMP’s shōjo sensibilities to pour as much emotional gasoline and ornamentation on the whole affair as possible.

It is, frankly, far and away too much for Rintaro to boil down to an hour and a half.

Every relationship and character arc, aside from perhaps the most top level primary one of Kamui and his dear friend Fūma, is virtually dead on arrival and steamrolled to nothing. There is just not enough space to adequately introduce the cast of individual players in this game of destiny and give proper context for who they are, what they feel, the forces that struggle within them, and so on. Yoshiaki Kawajiri’s famed destruction and gore festivals worked as well as they did because his casts were small and easy to execute proper characterization on in the time provided.

Rintaro’s X/1999 has the body of a Kawajiri work, but none of the heart and soul.

This all being said, the film can taut positive marks (limited though they may be) in that body department.

The movie is a visual scorcher. Mid-1990’s Madhouse theatrical animation that pulls out all the stops. Background and landscape paintings that would look right at home framed on a living room wall as entirely separate entities devoid of context from the movie. If one is a fan of raw destruction porn (which would be among one of the limited reasons to watch the film these days), buildings explode and debris soars with meticulously and painstakingly realized variety, detail, and fluidity. With all of the difficult to achieve yet dearly appreciated focused treats for the eyes sold as hard of Rintaro can crank the dial, it is a wonder this movie is as bad as it is on the whole.

To put things in perspective: in my reflections on Tokyo Babylon, for how uneventful and underwhelming it was as an experience I considered it as treading water just below average. X/1999 though is a worse piece of media than its Tokyo Babylon predesessor, and that is despite flooring it on every possible visual level. The character writing (and lack thereof in many cases) and how situations flow together absolutely buckles under the weight of it all.

This film, like many of the individuals in it, may have been well and truly been doomed from the start.

At the time of this writing, I have already completed the X television (Edit: X: The End of the World and Us now posted) series, which was, oddly enough, actually directed by Yoshiaki Kawajiri, with Rintaro handling the opening credits.

While I finished this film before even seeing an episode of that show, in looking back on the movie now after a few days there are smaller, very particular elements I can also say I enjoyed in the film adaptation over the series. Some of the character designs I feel look better in the film, such as Sorata Arisugawa’s overcoat and sweatshirt-vest over undershirt style (which gives him the relaxed vibe his character demands, while looking a little less overtly comedic than his giant letter A shirt in the series). On a similar level, Satsuki Yatoji as the whiz kid resident within the Beast computer system has an aesthetic inspired by more core cyberpunk sensibilities between her bodysuit, piercings, streaks of dyed hair, and so on, that I feel fit her better compared to her significantly more conservative anime counterpart in the television show.

These are but surface level compliments, however. I barely know who these characters are as people, in terms of seeing them just as they are in the X/1999 film.

That a simple music video prequel to the movie (itself entitled X: X2 Double X, because the 1990’s were a horrible strain on the quality of life for that letter) that races through a few of the initial manga chapters set to X Japan’s “X” has roughly equivalent if not better for its running time narrative delivery than Rintaro’s film speaks volumes to how hard the sword came down on him in terms of this movie.