This will be the first of three back to back posts regarding anime that relate to CLAMP’s long running (and long stalled out) apocalyptic manga series simply entitled X.

To begin with Tokyo Babylon when aiming to get to its related works is a bit of a restrained exploration.

In many ways a spiritual (in multiple senses of the word) predecessor to X, the corresponding manga began in 1990 compared to X’s 1992. While complete in its own sense, two primary characters from this earlier work, and the fates they carry, do transfer over directly into the narrative of the latter  series of Judgement Day events. X, CLAMP’s famed classical representation of an end of days tragedy, has been technically in progress for over two decades, though full production has been on hiatus since 2002, with a brief release in 2006. Real life disasters in Japan had been hitting too close to home for what the narrative was dealing in.

To begin with Tokyo Babylon’s anime adaptation before getting to its successor works is even more restrained.

Going along with the onmyoji and occultism interest explosion in Japan brought on by the success of Hiroshi Aramata’s Teito Monogatari novel volumes through the mid-to-late 1980’s (whose anime adaptation, Doomed Megalopolis, I have at least written a little about previously), Tokyo Babylon follows the spiritual mysteries or helpful interventions worked on by Subaru Sumeragi. The young head of the most enduring and powerful onmyōji clan in the country, he in turn resides in Tokyo with his twin sister Hokuto. They both also are frequently in the company of their mutual and slightly older veterinarian friend Seishirō Sakurazuka, who claims to love Subaru.

The setup alone allows for a rather functional supernatural investigation series. And that is before even accounting for many of the heavier and darker aspects the original manga deals in. But, I did mention there was a lot of restraint when considering the anime adaptation.

A key problem the two OVA episodes have is they really do feel lost and alone in comparison to their source material. Even with my rather short core concept description, that is still roughly as much grounding in the universe and events of the series as they are parlayed to us in the home video format. Unless one was already familiar with the source material, and was viewing the anime version merely to see their favorite characters move around, these episodes do a poor job operating as self contained entities. Worse yet, because of the nature of the investigations (the first involving a young woman who wants revenge for the death of her brother, the second being about another onmyoji and their past), we spend a significant amount of time with the spotlight off from our lead characters.

It is an interesting conundrum to be in, when one considers that as a larger series this could have worked very well with very few changes to the core formula. Critically acclaimed later series such as Kino’s Journey and Mushishi for instance have their leads tending to drift in and out of various circumstances and small standalone stories within their larger universes. The characterization of the very limited main casts doled out in small ways over time, as they handle and navigate their various circumstances.

Tokyo Babylon feels likes a less than optimal selection of episodes from television series upwards of ten times its two shot size. With what amounts to three leading central figures, we do not get much time to learn about them as people because it also needs to get through the mysteries it wants to provide us. As a result though, our cast are more like mannequins going through motions. Hokuto exists only to wear some zany clothes and throw out a few chipper lines, Seishirō functions as a get out of trouble free card. And Subaru… well, he also wears a lot of zany clothes, and as our most central figure is very good in the art of having little narrative presence or effectiveness. He is also only sixteen however, so one could perhaps call that an effective extent of his abilities.

The director, Koichi Chigira, actually was one of the episode directors under Rintaro on the aforementioned Doomed Megalopolis anime Madhouse had been working on, so in that respect roping him in for this project is thematically supremely appropriate. However, that work was able to somewhat buoy some haphazard plotting and narrative events that jumped across multiple years by punching up the animation level and emphasizing the unique supernatural action sequences the setting allowed for.

Be it due to the source material for Doomed Megalopolis being a novel with lush language that could easily lead to vibrant combat between shadowy entities and horrors, or CLAMP’s early stage shōjo manga style (Tokyo Babylon was only their third manga series, after RG Veda and Man of Many Faces), the anime OVA in question here is a remarkably static affair. One will see very little use of dynamic angles, impactful continuous shots, and so on. While it by no means need be an action packed affair, particularly for a series that seeks to have an investigation focus, much of the cinematography is flat with basic straightforward shots  and a penchant for zooming between close-ups of characters faces while they speak.

This is unfortunate, as the general atmosphere this anime adaptation tries to give the material really deserved more. The music is an often light and somewhat ethereal affair with hints of saxophones, and much of the art direction is focused around giving tastes of a dreamlike haze to the visuals. The sort of feeling one has on a cool but completely walkable early weekend morning in a city, where there is every indication of life and yet a quietness. The sense one may be the only one in the world, if but for a brief moment, and perhaps it gives a momentary sense of inner calm or a call for contemplation. Which is thematically appropriate in many respects to the source material, as a major consideration within it is how much one could truly ever know another person outside themselves and ideas relating to individualism.

It is a shame these elements were not destined by fate to be in a much better production however, at any rate. These qualities are often lost on our characters, cast, the script they are going through, and what the camera is generally engaging with that dulls these stronger qualities. 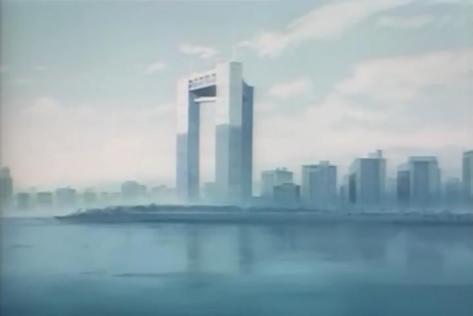 Regardless of how negative this reflection may come off as on the whole, I actually do not think Tokyo Babylon is unwatchable or anything, by any stretch.

For me, the spell it wants to weave falls into that strange and hard to evoke area where it is just below average. Uneventful and lacking passionate qualities that could push it any higher, but without more numerable technical errors to truly sink the entire operation. Effectively speaking, it happened, I consumed it, and I moved on dwelling on it little one way or the other. For something I watched merely to get a grounding in who Subaru and Seishirō were in their anime representations prior to delving into the film X/1999 or the X television series, which are the real big game hunter targets of this media exploration, I can not say I truly regret having spent my time with them here in these OVA’s.

But for a title that evokes a sense of the great excesses of human myth, legend, and history, and a potential looming downfall come the end of days, Tokyo Babylon is awfully forgettable.

Choose your fate: proceed to Part Two,  the X/1999 movie or jump to Part Three, the X television anime.

2 thoughts on “Mothballs: The End of the World and You, Tokyo Babylon”