When punk teen motorcycle gangs and brand names atack, do you know where your military mecha are?

Here is Yui Takanaka as she was in Megazone 23 Part I, courtesy of ToshikiHirano’s character design efforts.

Here is Yui as she has been reworked in Part II.

Every entry of Megazone 23 has a different character designer (aside from Haruhiko Mikimoto’s Eve Tokimatsuri, who is retained throughout), so the roulette wheel for this one turns to… Yasuomi Umetsu. He of works I have been covering a lot here recently, ranging from Wizard Barristers: Benmashi Cecil, to the little bit of a section he had in Cool Devices, to most notoriously the violence and trauma exploration / exploitation known as Kite.

Which, while his involvement in a project can at times be serious cause for alarm, here it is an incredibly good thing!

Remember: Regardless of reputation for a line of modern clunkers, the man can actually draw really well when push comes to shove, and this is still the 1980’s on top of that. Here he has been given free reign to design characters for a what amounts to a film where punk teens of all stripes and fashions sit around watching music videos, smoke a bunch, hate horrible beer and want better options, and finally Take To The Streets Against The Man.

Also: Pinball machines that are simultaneously a Silverhawks and Thundercats unit. 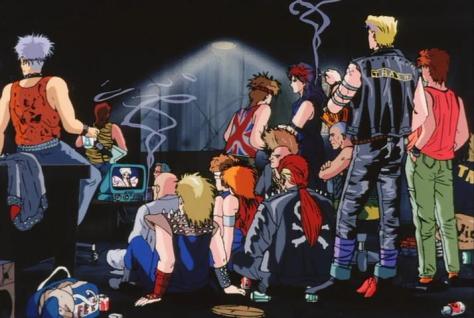 What I am saying is this was a really fun time.

Since Yasuomi Umetsu’s way-complicated punk characters are backed up by him also getting to be the Animation Director, he is restricted to his best areas. Just as Part I embraced the 1980’s in its more leotards and legwarmers senses, here it has gone more surgically down the ‘80’s punk route to a degree few other anime achieve. Not only that, but all that under the more insane Ichiro Itano (they of “Itano Circus” fame with his penchant for exquisitely animated missile combat in Macross) directing the production, everything looks absolutely fantastic. While Megazone 23 Part I had plenty of anime headnod cameos, here it has more brand name products like Budweiser cans being opened, Dunhill cigarette packs being unwrapped, and our lead walking around with a Sex Wax Original jacket (it’s a surfboard product folks).

The detail work required to maintain every aspect and bring these to life convincingly, from the human characters to the (potentially highly unlicensed) brand shutouts, while never going off model are alone more than reason to watch Megazone 23 Part II. It is in every way an animation project that would have been absolute hell to work on, and yet is also the sort of thing many in the industry dream of being able to pour the time into to make so fluid and realized. They were putting these things, complicated character visuals on down, into the work because they too found it fun.

And that has an infectious quality to it, for me.

Given the choice, I would say Part II is my favorite between it and Part I. 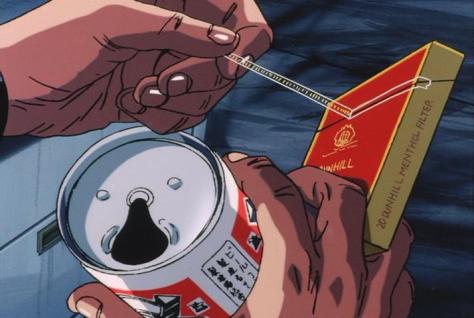 Technical achievements aside, there is the narrative to consider.

The story Part II wants to run with, while a continuation from Part I but six months down the line, is a far more straightforward one than the original. Partially because we as viewers would already know the big reveals from the previous entry, also because this sequel is not trying to add on to them much. The previous OVA was an efficient if crunched together amalgam of ideas the folks at AIC, with the original television project canned, were unsure would ever get any followup.

Here then, with the space of over eighty minutes to use as a playground, this is more of a celebratory party for something that did unintentionally well in the home video market. Our protagonist Shogo Yahagi joins Trash, the aforementioned punk teen biker gang, and is on the run from the military and police who have been seeking him out since the events of Part I. Meanwhile Eve, our idol singer, has herself also been evading the military in spite of their efforts to have a double replace her. She too has been attempting to make contact with Shogo, who in the chaos from the end of Part I has lost his crucial Garland motorcycle and the technology it has.

Trash takes it upon themselves to want to seek out Eve and help Shogo get his bike back too. 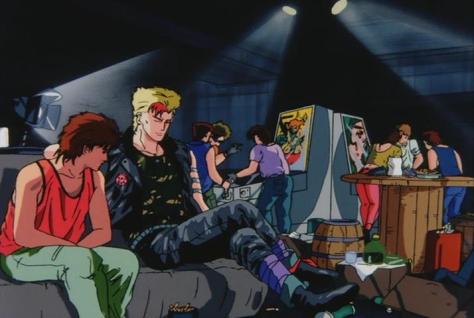 While simple written down as such, in execution it does manage to give more of a conclusion arc to previous events, which seemed nebulous or even downtrodden at the end of Part I.

The final message the work has, and how it chooses to handle concepts like maturity, becoming an adult, and the youthful struggle against the same, takes a very unique perspective and tone for most forms of media of the era. Even now, in fact, the potentially unfulfilling and yet more tactile because of it approach implemented here still rings a keenly resonant bell.

That it is all dressed up in a package with more set pieces and ludicrous detail work than what came before it, to dazzle and set off like a rebellious animation fireworks display, is in a lot of ways more thematically relevant because of the path it chooses to walk. It feels very at ease with itself and the choices it makes as a production, and there is a meta duality of that in light of the finale that I found wholly appropriate regarding the angles between adult and youth.

While Megazone 23 Part II is a conclusion in its own right, AIC did see fit to attempt to tap into the well once again in 1989 via Megazone 23 Part III. Much like the economic bubble that allowed OVA’s like its predecessors to succeed, the heights of the waves it rode could not last forever.