This Week: Megazone 23 Part I

The last time I watched anything from this series was on some Nth generation VHS bootleg.

Except at that time, it was as parts of Robotech: The Movie.

Credit where it is due: if one wants to grab a random OVA to slam into the multifranchise pileup that is / was Robotech, you may as well go with something that has Haruhiko Mikimoto on board as a guest character designer for the idol singer.

That the big red motorcycle can also turn into a robot Genesis ClimberMOSPEADA style (ie, what would be adapted as the third part of Robotech) is more of a bonus at that point. And yet, when Robotech: The Movie was made, it was Megazone 23 Part I mixed with The Super Dimension Cavalry Southern Cross (what some know as Robotech’s second arc). In short, Robotech was weird, and while I grew up with it we should really stop dwelling on it.

That is the sort of thing that keeps more Macross from coming overseas, after all. 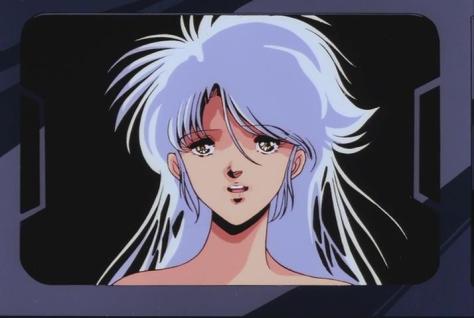 Even if one did not expressly know Megazone 23 (it did not even have the Part I until later volumes were made) was originally intended to be a television series, but the project was canned and the existing project work / episode parts were salvaged together to make a direct to video film, I think one could still tell.

The way certain exposition bits or transitions link things together, and the timing between them. It actually flows really well for that, all things considered, so you would need to be looking for it most of the time. This hold true until some particularly hamfisted parts close to the end, namely a prominent sex scene where a character is also simultaneously trying to sum up The Conspiracy Which Rules The World to their partner. Which, while the visual sequence is tasteful enough on its own merits, combined with what is being said at the time it does seem to me like the classic square peg elliptical opening conundrum.

I’ve never tried explaining to a partner how a computer system secretly governs every aspect of our society, our city is actually a spaceship, and even the international trips friends or relatives have taken were actually controlled brainwashing and false memories inserted at the airports. Because these are ludicrous notions even when you are not naked.

But, maybe your milage is different when it comes to that sort of thing. 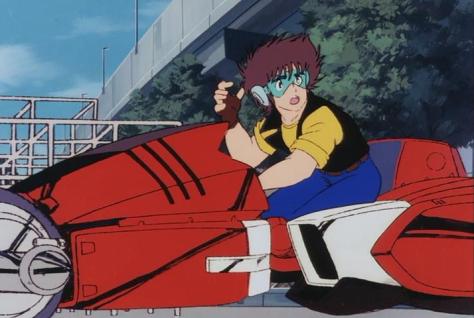 In either event then, that is the rub of the narrative, and Megazone 23 as a franchise has acquired its fair number of comparisons to elements of The Matrix for good reason.

Except here, the peak of peaceful human civilization is the 1980’s as opposed to the 1990’s, which is a natural extension of the production’s day though also raises some interesting considerations when regarding the Cold War as a background conflict issue. I suppose that would be something a computer system would have a comparatively easy time handling though, in terms of having plenty of time to make moves and consider all of its options to more perfectly manage the demographics it governs.

It certainly does a swell job at capturing the look of the 1980’s though, without question. The fashion absolutely screams of its decade, right down to a leotard and legwarmer laden aerobics dance sequence. Personally, I find this rather endearing, because I do at times enjoy it when a production can be so keenly pinpointed to being made in a particular era. Consider the clothes folks wore during those years and really, the ‘80s make for great wardrobes when it comes to a character design perspective. It runs the gamut from overblown tacky to frumpy. One can mash up all manner of colors and cuts, and generally get away with quite a lot in terms of plausibility. Toshiki Hirano (who did all of the other character design work here not relating to Eve Tokimatsuri) certainly had his work cut of for him, and in that respect nobody in this OVA looks out of place or unnatural to dress up as in the slightest. Aside from some hair colors of course, though even that is pretty flexible when it comes to the era.

More modern anime should make use of the 1980’s for period pieces, is what I am saying, as weird of a sentence as that is for me to actually type. 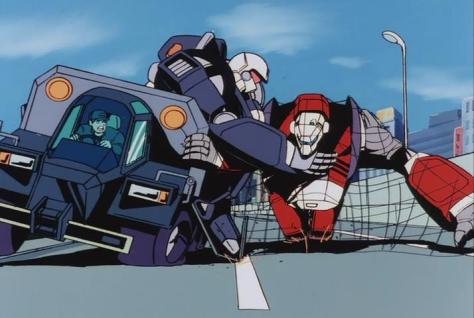 Given how much science fiction media and our own reality have changed over the years, I think Megazone 23 Part I has a lot of interesting ideas for someone to look back on today. How it handled in the 1980’s science fiction concepts that now may look or feel significantly more cliched in the modern era.

Beyond that though, with one of the other major aspects of the plot relating to the popular EveTokimatsuri being a virtual idol singer, there are tones that can be seen as quite prescient for a time long before the likes of Vocaloids and Hatsune Miku’s smash success of recent years. How some of those concepts are managed, such as a recording team cutting together her choreography for a new dance sequence using pre-existing models or a sequence near the end where the military has reverse engineered their own version of her program so as to use her to encourage the citizenry to war, still come off in intriguing lights. Perhaps now more than ever, as the technology for there to be a figure like Eve is closer to our reality than any other time.

As a collection of fascinating ideas from a much larger planned series, Megazone 23 Part I managed to pack in as much as it could in a much smaller OVA body.

Again, in turn the narrative sort of rattles around a small bit, in that the romance subplot angle it tries hurling between Shogo and Yui is likely the biggest casualty. It starts out fine enough, it is just a matter that over time the prominence of it is retained while the human connection between them feels less palpable and more like they are characters going through plot motions. This is not the worst thing in the world though, as far as engine damage goes, and certainly many an OVA has butchered their romances even in containers that were never intended to be a full television series. Even so, it feels important to point out, though on the whole as the final product has plenty of other themes and ideas to patch it through.

From the simulated reality trappings to wonderfully delicious cel animation work (the scenes that involve Shogo darting through traffic on his bike are themselves technical marvels), there are a lot of positives to take from what AIC accomplished here.

On top of that, experienced anime fans will be able to enjoy a number of subtle reference nods, such as a short bit where lookalikes of Arsene Lupin III and Daisuke Jigen are police officers, that never detract from the overall momentum of the work. At the same time, in a world where time became managed to look like the 1980’s for years to come, those references can themselves take on their own little meanings for what the system may have had in mind for them.

A home video success at the time of its release, Megazone 23 would go on to be followed by Megazone 23 Part II just over one year later to conclude events in an encore presentation. Megazone 23 Part III would see release over four years after that to bring about a swan song for the series, though many would argue its croaks were indeed a death rattle for the franchise.