In a word association game, I would have previously associated the idea of sweet blue flowers with a particular variety of Earl Grey tea mixed with cornflower and blue mallow petals.

Which is appropriate, given the flavor this shoujo ai series aims to have.

Romance is hard work. Most us have been there in one way or another, be it from unrequited feelings to needing to navigate some of the trickier interpersonal concerns that pop up during a committed relationship. Through the combined lenses of teenagers still figuring things out in life and the concerns or fears one may have with realizing they are homosexual, and things like love and growing up can be even trickier.

While this comes with eternal caveat that while I have seen hundreds of anime, I have not seen thousands, but: this series may well be the most natural and grounded central focus on lesbian relationship matters I have seen in anime up to this point.

I like the central hook of the series a lot: two girls were childhood friends, but one moved away a decade ago and they fell out of touch. Now in the present Fumi, the one who left, returns due to another move and as their parents remained in contact actually manages to reconnect with her old buddy Akira. They go to different schools, but seek to bring back the friendship they once had and the reliance they had with each other all those years ago while being able to mix new social groups as well. And as Fumi is coming to terms with in several ways, she is gay, and how much that makes who she is now different from before or not.

Whether intentionally or not, so much of this series amounts to information control. Rarely does anyone in this series really have complete data in terms of their interactions. Some folks get to learn of Fumi’s sexuality, others do not. A character may be having a conversation about their feelings on something regarding someone else to another who already has external knowledge, but said person can not disclose it. Someone may do something another may never learn of. And so on and so forth. While this sounds like the series would be labyrinthine in dialogue, it is actually anything but. Conversation flows easily and realistically, including moments where little may be said at all for a few different reasons. The difference is that we as an audience know a lot of the unsaid info, be it put on screen more directly or through internal monologues. So we are very much external observers to these series of character relationships as they fumble and stumble their way along.

It is certainly something that stuck out to me as a highlight of the show, and the idea that these interactions do not end up buried in overwrought cloak and daggers for it. Folks have a very natural level of dialogue that plays into the light but very identifiable tension that comes when one person knows a secret another does not. And sometimes that information comes out, other times it never does. And that is a palpable thing here, in terms of direction and delivery.

Thematically I would definitely view it as playing into the idea of the tensions one has when coming to terms with both the more universal notion of how we all handle secrets in various ways, and the more particular one of individuals growing up and realizing they are of a minority romantic and sexual orientation.

You know when you bring two reasonable magnets together, but just slightly apart? That there is a connection between the two trying desperately to happen that you can feel? The entire machinery of Sweet Blue Flowers felt like one of careful patience and trust at odds with one another, that sense in these instances of incomplete character information that while at times someone may want to leap across and tell all, they should not because of how it may make a third party or more feel. Fumi gets a girlfriend early on for instance, but who and how should others find out? What might they say or do or think, given what the characters know they know? That sort of thing. Likewise, how characters may feel when they are close to their limit  on the same front, when restraint may be testing them too much.

Nobody in this series is explicitly even a bad person.

There are a variety of personalities, sure, but so far as this anime is concerned there is a compelling case to be made for why all of them exist in the same world, town, or social groups. Some may be sweeter or more selfish than others as far as we see them, but nobody is running around as pure antagonistic force. In their own ways, each of the primary characters and several of the secondary ones are just trying to carve out their own paths. This goes well with the music, as one will not be finding aggressive cymbal crashing and string instrument screams here. Fundamentally they all want to do right, and they want to be happy while ideally being able to make others happy  in the process.

Things are just… hard, at points, going back to the idea that complete information can be at a high premium for the characters in this series. Like in real life.

For purposes of a more direct comparison, as I watched all of Maria Watches Over Us over the past few months for these posts, I would say that story is a very “grand” one when it comes to similar female relationship subject matter (despite few of them being lesbians in the direct narrative, as it is more an implied matter for fans). It deals in things like larger social systems via the orderly nature and ensuing navigation of the relationship selection process, and characters tend to take on very larger than life escapist fantasy aspects in their escapades due to how “big” it aimed to make its moments in tone and execution across four seasons. Sweet Blue Flowers by contrast is a more quiet show, with a smaller cast to boot, aiming at a much more direct and homely tale of Fumi and friends trying to bloom into young adults. 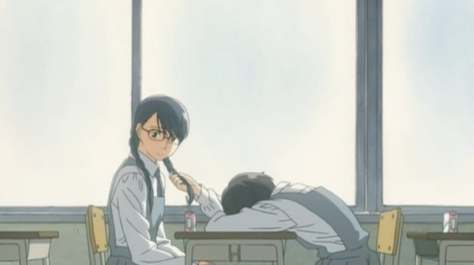 While the two series share a similar design aesthetic when it comes to things like sketchbook styled backgrounds  of realistic locations, Maria Watches Over Us would err on the side of being able to use animation to exaggerate characters for both dramatic and comedic effect, as a part of the “grandness” I associate it with.

Yet in this show, it remains rock solid locked into on-model realism mode, and instead it sought it use the strengths of animation to do things like add just the right amounts of light blushes in places. Some of them are very “blink and you’ll miss it” type stuff when they are not more apparent, so in addition to things like the information control matters this actually requires a rather active watching experience for a series that is usually very calm and methodical with walking through Fumi’s life.

On a related note, the series just poured animation frames into small personal moments, like an early one where Yasuko is just running her fingers up and around  Fumi’s braided hair. It is a level of visual attention that needs to go into the fingers that sells the personal intimacy of the moment independent of and yet reinforcing the dialogue, because of the effort required to make things like that so fluid and effortless for the characters to act upon. 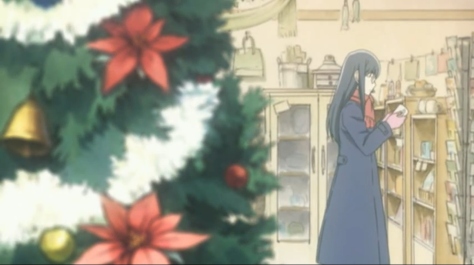 On that front, it might seem a little too fast for some, leaping weeks as it does. A viewer needs to mentally fill in that there were a lot of good but not as highlight worthy times in between. And I recognize that could be difficult for certain viewers. However, with “slice of life” being thrown around as much as it is as a genre, I would say there are a lot of ways to provide those slices. And growing up and evolving in ones life, relationships, or awakening sexuality takes time. In my eyes, the jumps are justified and allow it to get these developments across in a tighter running length frame. Which was even more essential here in the end, as staff mentioned long ago a second season of the anime will likely never occur due to low sales.

Even so, I would say this series managed to achieve in a number of areas many shows both animated or live action still have issues with regarding putting such a strong central focus on female homosexual relationships. It should be proud of that, to be able to bring the original manga to life in this way, and it should be shared with others.

4 thoughts on “Mothballs: I Still Hear The Sound Coming Out Of The Sweet Blue Flowers”