You know, when I made a joke last week about my write-up lineup as a sports anime tournament, I did not actually know The World Is Still Beautiful had a production break coming up!

I guess this really is getting to feel like a series of knockout rounds.

Just as Smile’s assent was portrayed to us via train conversations and some portable video game screens, here we are again on public rail transportation. But this time with cell phones playing an anime series in addition to a kid playing a game, and commenting on the story so far regarding the out of control robot who demolishes all before them with pinpoint accuracy. But, even with all the destruction it leaves in its wake, they are nice on the inside and all. Which then transitions into older students basically having the exact same conversation, but slowly edging us back into the table tennis.

Our overarching objective then for this back end of the series will be the rise of a hero to challenge Smile as our eternal robot and butterfly stand in. 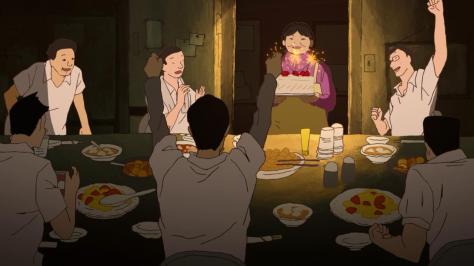 That is the top level sports narrative, but what the series has done so well and this episode in particular showcased so much of is that this is far more of a character drama (to its benefit or detriment, depending on ones perspective).

We have folks at Kaio Academy saying Sanada should be the captain, as that morale infighting festers. Captain Ota over at Katase High gets called out on a television repair call, but is wished well by his teammates and congratulated on how the family business is doing while at the same time pretty much every student on the team speaks openly of how much they detest Smile. Dragon’s family used to be in the floral business, but it failed, which in turn may indicate just why he works so hard to keep winning at table tennis and can only think of that even when the opportunity to go see the Christmas lights with a girl who likes him presents itself.

And yet, we know he likes her on some level too, because he has that poster over his bed. And the tissues. 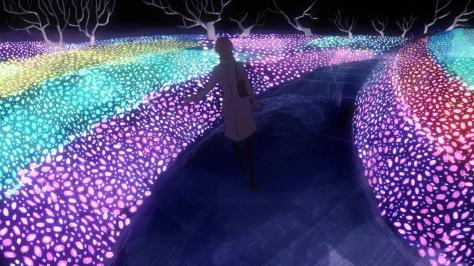 Which is just a good a transition as any for me to talk about: That Christmas Montage.

The entire sequence is going to end up on various Scenes of the Season lists by a lot of folks looking back on the spring shows, and it is definitely a strong one in my book. Not only did Wenge mellow out a lot after his ping pong playing career ended, but he learned the Japanese which allowed him to interact with and coach his team. And to be able to sing with them now, to be able to slowly show off this kind of more human connection accomplishment to his visiting mother. That he failed in his dreams, and yet achieved something greater than even that which he sought out for when he left home.

And while all of that is going on, the Christmas karaoke song they sing plays over everyone from the story so far. That we get to see even “I should go to the beach / mountains / overseas” guy still seeking his place in the world while Peco gets wasted by the ocean. Smile eats cake alone in the gym. Ota and Akuma are at work in their evening jobs, Dragon trains, and one sad girl just wanted to have that magical walk in the holiday lights.

It is very much a sequence that is there to show us how far some have come, and where they all are in their lives. That there is a great big world out there, and ping pong is just a small part of it and a larger personal identity and the dreams residing within it.

This was a week where the limits of Toei’s resources and how many shows they are working on seemed to creep in a bit more. I fully can understand the notion that for the debut sumo matches of Matsutarou and Tanaka, the event may not have a packed audience. But even so, when multiple stationary establishment shots for the outdoors and indoors, including unmoving banners and limited static crowds, are on hand… it seems hard to divorce the notion that there was a fair amount of cost and time saving going into it.

So in other news old man Nishio returns after his coal mining days from the start of the show, which is not unexpected given how often he pops in during the midshow eyecatches. But I kind of liked him and the relationship he seems to have with Matsutarou, so any commentary he can provide could help going forwards. I can barely recall the names of any of the other sumo wrestlers in this stable outside of our lead and his skittish sidekick, though I am not entirely sure I am supposed to either. So really, any character to attach to a bit more will be a nice welcome. 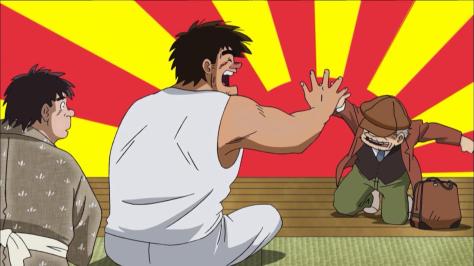 I did enjoy the visual aspect that, given the makeup of a sumo wresting match and the makeup of the field, Tanaka did not even need to say that he lost in order for his teammates to get the message regarding his result.

He did not answer when asked, he merely walked past them, and… yup, there is his dirtied up back plain as day for all of them to see. That is the kind of thing that would not necessarily work in many other sports, like say football (either form), baseball, or indeed even ping pong. Sumo is pretty straightforward as the winner is determined either if one pushes the other out of the ring, or if they can push the opponent to touch the floor with any part of their body that does not happen to be their feet. That is generally it, outside of some fringe cases like a wardrobe malfunction. One round. So a dirty back means something very particular happened, and that indicates failure as opposed to a big game saving play.

Going along with that, it did feel a little underwhelming that Matsutarou’s debut match was pretty much just a headbutt at the end of the episode. Not much of a struggle to get excited over, and we have already established he is plenty strong. Ideally this is just a setup for him to rise some ranks off camera, and we can move forward from there.

I read elsewhere that in the source material the whole “Megumu is in a dress and acts as a mysterious girl at the beach” bit goes on a whole lot longer, so it is entirely possible Ruri’s crack here about there being no need to drag out this reveal is as much a joke on its own right as it is a commentary on that.

So that is the kind of thing that can be both amusing in its own and then a little extra jab to show the team understands the material, which is welcome.

Another injection of members for Quest Hall then, raising the total by four in a single blow. Not that this was unexpected, given the cast members and antics of the intro, and at this point I think we are well and truly full with only five episodes left of the series remaining after this one. Mimori getting her own little date escape seems fitting, as it brings her into focus more after most of the other character received their own previously. And, of the four members added to the hall, she has had the most preexisting screen time. To say nothing of it making the most sense for Souta to go on a date with her of that new injection group, as Kurumiko is too young, Tsumugi is out of Souta’s age range in both directions, and Mei he barely knew.

Speaking of Mei: this quickly turned into her big showcase in the second half. It gets easy to forget that she has technically been here for a few episodes now, just very minimally. Which can be a problematic thing, with so many characters. Where there is the danger her Let Me Show You Some Of How The World Truly Is demonstration coming off as more mechanical. But the series, with so few episodes remaining, also sort of has to do this at this point to be able to comfortably pace any kind of conclusion arc. We could no longer avoid addressing at least some the deeper mystery aspects, or we would have a sludge like and underwhelming finale whatever the series did. As a result its hands are rather tied either way, though Mei showing up as a kind of plot device at least kind of fit her colder, direct, or more matter of fact personality aspects and acting on the behalf of an organization.

We go for some jumping around the temporal streams, we have some parallel worlds where some characters don’t know Souta anymore, Nanami dies, and… Miyuki Mackenzie on the same ship burning Souta was on, except now she is Miyuki Hatate. And she gets a protagonist flag in that world plain as day, where her grandfather went missing during World War II under the same building Souta now lives over. So that is certainly… something to consider regarding that sealed box under the building, and may well play into some reasons why it fell into such disrepair in the first place in our original world.

In either event, unless Souta turns out to be denser than lead next episode, he should have the idea that he is the protagonist of this particular version of universe events. And that should take us through to set sail for everything behind The House of the Seven Virtues, The Angelus Gemini, The Sacrament, and all the rest of the roleplaying game character class name mechanics on this back end of the series. 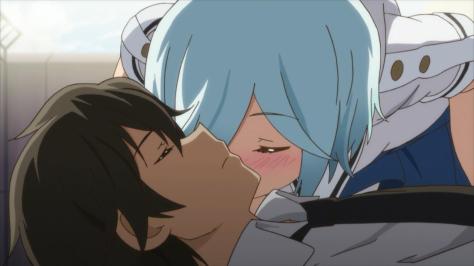 I am conflicted regarding Mei’s memory wipe at the end of the episode.

On the one hand, I think it is a useful enough thing to want to try and do, so Souta needs to figure out the rest on his own without a potential character crutch. But I do not feel we really got to know Mei in much of a capacity for her memory erasure to have much impact. I actually think I would have preferred it had she actually more fully taken on the weight of Souta’s death flag herself, and ended up dying or otherwise rendered out of commission via that processes. It would still be potentially punching above its weight given her character time, but I feel it would be a more natural way to remove her skillset from the story for Souta to need to continue on without. We will need to see where it goes from here and how it plays out though, given the alternative character personality she now has.

At least she managed to sneak a kiss out of the ordeal before she left.