If it does not stop snowing, pretty soon I’m not going to be able to do much other than these anime shenanigans.

“You bastards with your vague hint think you’re such hot stuff” indeed. I was probably going to want to strangle Senketsu if his compilation episode joke actually turned out to be the case.

That said, I do now wonder how much of Senketsu’s voiceovers for things like these bits or the episode previews could potentially be happening in or out of universe. If the life fibers control the world, and Trigger wanted to take that to a meta level, could Kill la Kill then be kind of rebel propoganda show?

I’m getting way too ahead of myself though. 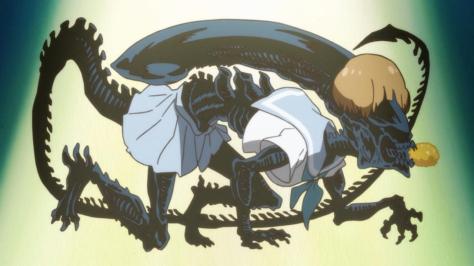 So Ryuuko’s dad founded and funded Nudist Beach (not entirely unexpected) and Ragyou… is the leading human representative and business conduit for a global alien conspiracy (not quite as expected). The idea of the “Clothes Make The Man” phrase being warped into a “Clothes Made The Mankind” idea is a kind of nifty one though, particularly in the area where the parasites would have burrowed into their hosts but would end up killing them in the process. Much better then to have a longer term leeching operating as an external covering even if it means less of an energy haul, since it allows the crop to actually grow to larger population levels so the aliens can go all Soylent Green on us.

This is definitely enough of a kick in the energy pants to where I want to know where they can go with this, even if it does potentially mean we could be jettisoning potential material when it came to exploring the body issue commentary since that could be lumped under “Alien Conspiracy” as well.

Ryuuko’s “So you want me to fight for the human race? To hell with that.” moment basically fits in with the Refusal Of The Call part of the traditional Hero’s Journey framework. Which, it is kind of important to note, she really hasn’t been much of a “hero” through most of the entire series. Certainly, she has done things like rescue Mako, but her overall goal has been this sort of aimless revenge drive, where her target has shifted tangentially depending on what is roadblocking her way in that particular moment. She didn’t have enough information to really have much of an objective otherwise.

Ideally, with tensions being what they are in the room at this moment, perhaps these events can become a stepping off point for Senketsu and their opinion on the matter to be heard by all. Tsumugu was able to hear him once before, and everyone getting a change to maybe hear what the resident Life Fiber constituency has to say about all they have heard and what to do about it could make for a great moment.

Sayu in bed thinking of that one time she was patted on the head by Kaname is the sort of overwraught thing I have difficutling finding myself invested in, unfortunately. Her “There’s no way a childhood crush bears fruit, I’m bound to forget these feelings one day” is, well… it’s been five years since elementary school, that should have happened already.

It would have happened already. Unless you are a crazy person. 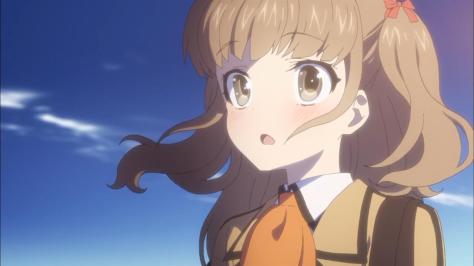 I would find her character position to be more intriguing had she moved on, and then he came back into her life as he did. Now the same age as her, having to potentially come to terms with that sort of matter and what she saw in him all those years ago and where she is in her love life now and the places that emotional conflict could go would be a far more interesting narrative to me.

The “I decided I’d live the rest of my life alone” stuff as a lifestyle choice made by a little kid half a decade ago just doesn’t jive with me. These are the areas where the series lurches from understandable and solid interactions and decisions from the preteen and under crowd to overcooked melodrama territory in my mind.

I do find it thematically appropriate that in reentering the sea in search of the village the boys are being led by a girl again after Hikari and Kaname agree together to not change, just as they were when they first left for shore school. The whole “Your ena is not complete” “I think it’ll be fine” and the observation of “The water temperature is pretty low” is all going to come around and bite Miuna hard though, of that I am quite certain.

It was nice knowing you, in the event the show bumps you off!

Given Hayashi’s work on the “From the Other Side of the Tears” short from the Ani*Kuri15 collection, and the focus in the television ads on a more thoughtful tone complete with some tears, I was kind of wondering if there was going to be some sort of musical montage. Not only did she deliver on that front, but I thought it was a really well done little thing. Montages are really easy to mess up as a storytelling device, but she seems to have a real knack for executing on them. I hope that continues to be something to further explore as her career develops and she potentially takes on more of these higher level production positions.

The most grounded and down to earth of Space Dandy so far then, shoving two of our established crew pretty much out of the picture to focus on our main pomapdor and a sort of little girl space gypsy. And her penguin doll consciousness storing plushie.

As a result, the actual content of the episode itself kind of leaves me with little to really comment upon directly. Which is kind of funny, given how both myself and others probably felt they were steteching when it came to the more madcap episodes.

It was a well executed little single episode character exploration, where we met and got to know a new individual through a complete arc and have our main guy get some much appreciated personable action. All of it wrapped up in a lovely visual stew of space trains carrying passengers through the stars and red convertibles driving folks on the ground with lovely evenings at an otherworldly alien carnival complete with a glittering sand spewing whale creature. Extremely solid work, especially with the tonal shift, and I’m certain Hayashi is going to be really proud to have this in her portfolio going forwards when new projects are going around.

Adélie’s “Can I join the crew?” request, turned down though it was with the “Maybe when you’re older” kind of line these sorts of situations often have, does seem like exactly the kind of thing this series is going to come back around to. Which, admittedly, I don’t think is a very unique opinion.

The series has shown both in universe and in the ending credits theme itself that it likes the idea of mucking around with time and a many worlds interpretation of universe timelines. So Dandy’s “Sure thing” coming back around to later bite him in the butt on this matter in some chain of events somehow I’m certain is exactly the kind of thing they are trying to prep us for.

Please tell me she has some kind of character demeanor change during the growing up process though, as I feel there’s territory there they could play around with for humorous effect when it comes time to collect on that promise rather than just going for “Adélie as she was before as a little girl, but taller.”

Maria has monitors in the random public bathroom to watch the siblings have psuedo gore sex?

“Researcher” indeed. I bet she isn’t even approved for this study by her Social & Behavioral Sciences Institutional Review Board.

For a series that consists of roughly three minute long episodes though, my internal sense of where we are and what we are doing is being thrown for a right royal whiplashing. We have the bathroom scene, but we also have Yume outside being wrapped up in a blanket for transport to the facility. And Utsutsu is, understandably, in a body bag after being munched on by his sister. So when does the public bathroom scene happen? The ambiguous future, after he apparently slaughters the other monitoring scientists and somehow links back up with his sister after this confrontation with Maria? Where the scene blocking is awkward and haphazard enough where he was just standing in the middle of the room staring at the door like a robotic video game A.I. from two decades ago.

I mean my bar for this series is pretty low, but… it should not be this hard of a timeline of events to keep track of for what is in total less than about twelve minutes of footage if we add all the episodes together.

Given, our dialogue here is consisting of lines like “He didn’t die. You killed him.” and random cutaways to Abusive Yet Nebulous Father Figure Concept for cloudy “My blood flows through you after all” lines. So I dunno. Half the screen is routinely covered in black clouds, but I am not even sure what they are censoring with them this week, as the underlying gore doesn’t seem any more extreme than dropping the two open slices of a strawberry jam and peanut butter sandwich on the floor.

Last week was a nice and light little reprieve from all the tournament shenanigans during the break period, but thankfully they are not going to drag that out for multiple episodes at a stretch. So we’re right back into moving along with the top sixteen bracket and effectively the “real” part of this whole World Tournament thing.

Admittedly, I still expect the series to throw some kind of wrench into the gears and cause a massive course shift either before it actually concludes or shortly thereafter, given all the stuff with Reiji being from another dimension. But this is as “real” as things are going to be until such a time.

In this case, we have a Day In The Limelight sort of episode, following Mao around and seeing him come to terms with his strategy and hangups when it comes to fighting Sei and Reiji.

Which is to say, he had no angle in his brainstorming that actually would have resulted in victory, which was kind of interesting to see him walk through. I think it was the right direction for the episode to take, as certainly as viewers we’re all pretty much dead certain the lead characters are not going to get knocked out in the first match of the top sixteen. What they are up to then is kind of irrelevant when it comes to anything related to drama or tension, and we can make something more watchable out of it by looking at Mao trying to figure things out with his Master and how the battle should be handled.

The “Who is your favorite female Gundam character?” thing between Master and apprentice fundamentally coming down to “Because I simply like her” was a nice way to approach that kind of argument which I’m sure has burned down many an internet thread over the years.