The one third or so mark of the season, and some of these programs are going to need to start coming in for extra credit if they don’t want to be too off course come midterms.

That is at least a little bit more I know about Nudist Beach now. But given that they were fielding a full on robot counterattack from a secret command center and we are actually seeing some of the scale of their supposed operations, I would have liked to have at least a little more investment in seeing them struggle, get smacked down and essentially firebombed into the stone age. For all the conspiracy and larger hints offered when Aikuro was having small talk with Tsumugu so many episodes ago, I still don’t fell I know really anything about what Nudist Beach actually does or generally stands for.

Apparently we’ll find out “everything” next episode given Aikuro’s closing lines and the preview, but it is disappointing on a certain level to see this big rollout this episode and their smackdown feels kind of like white noise. 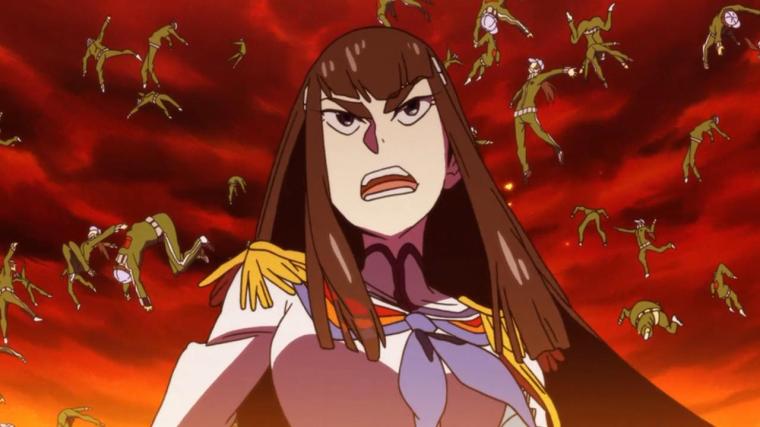 All the remarks about Japan being spilt between two conglomerates is at least a little jarring to me on a certain level. So were the other two schools on the Raid Trip Takarada allied supporters, under their influence, random city state level standalone resisting academies, what? At any rate, Satsuki has been well aware Osaka was going to be the hardiest holdout given her “Do you think I would commit a force this large just to fight students?,” the physical presence and the next level gambit where she also knew all this would draw out the renegade Nudist Beach forces (who, on their end, also wanted to rescue Takarada). And there’s Ryuuko to deal with as well.

The stuff about Ryuuko having a human skin connection with Senketsu seemed like the exact kind of thing the show would theoretically have been wanting to put more emphasis on given all the “be worn by me” stuff we were playing around with at the start of the series. But it just kind of gets glossed over in a snappy “You’ll only last a minute” “A minute is all I need” exchange and bing bang boom moving on style. Which is.. kind of odd, I think. I had expected a scene like that to have taken, well, more time, either to raise the stakes of the combat clock or the emotional connection of such a bonding.

Kill la Kill kind of feels like it is trying to sprint burst speed read rapidly though a whole number of things, as if it’s conclusion was not nine episodes away but one or two. Even in the Trigger newsletter, they are calling the next episode “the end of Act 1,” which means Act 2 is going to be much smaller by comparison. It’s kind of a weird sensation and pacing, and the only way we’ll be sure if it works or not is to see what it actually does with the time.

From the studio that brought us the anime adaptation of Another: Industrial crane fall down and go boom out of nowhere. Also pulled from the ether: sudden sparkly mermaid ena skin development and swimming capabilities in someone who previously had none. I hope the wheels don’t fall off on this series like I felt P.A.’s swing at Another did when it moved to jack things up. 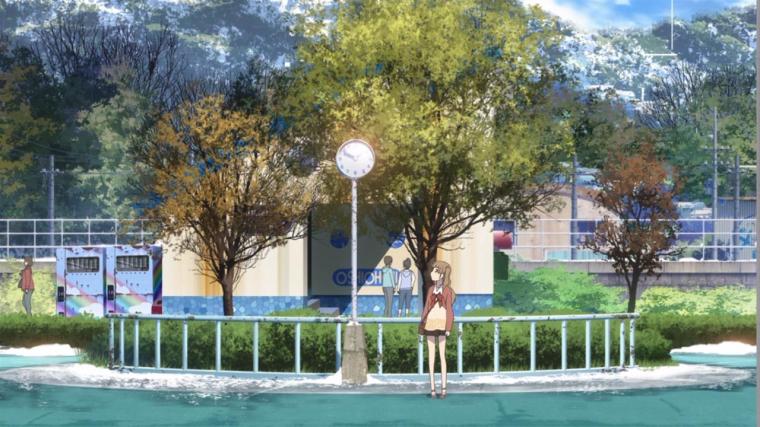 Sayu’s slow burn descent into blowing up into an argument with Miuna over how she has been acting I feel was appropriately handled due to the time it took to actually explode. It’s a frustrating situation, being the third wheel on a day out, and especially so if it’s with someone who got their long term crush returned to them from a extremely terrible separation event. They don’t realize the optics of how they’re actually acting and making other people feel.

I do think it is really harsh that Hikari let Sayu sit in the back of the cargo area of the small pickup truck while she was clearly very emotionally distressed from her fight with Miuna and crying quite a lot about it. I’m not sure to chalk that up to raw boneheadedness on his part or what. Hikari, you let someone feeling like that ride in the truck with the nicer seat and where they won’t feel alone and bouncing around, come on dude.

That Sayu and Miuna are still very much hung up on elementary school crushes from five year ago though is kind of odd to me in its own right, I have to say. If at least one of them had let go, I think that could have led to a potentially more interesting developmental or interaction dynamic when either Hikari or Kaname returned. But we’ll see where they go now that the boys are back in town.

I figure I’ll just keep doing something like this going forwards, since every episode has had different handlers in these departments as they play around with the character toys and playsets they are being provided to go hog wild with. Maybe someone will find it useful, but at the very least for myself it makes for some interesting reading about folks whose names I don’t see as much.

Also: I want to know what Dandy is getting ice for his drink for. What fine beverages is he drinking in his spare space time?

I do continue to love the alien designs. The doctor with the nose horn thing that also loops around his mouth structure? Very nice stuff. I kind of wish the mercenary team sent to hunt Dandy down was given some sort of cool operational code or unit name or anything. There’s a lightsaber wielding mustached crawdad alien with a Scottish accent. His team needs a name. Gel’s presence on the ground during their operation was also actually rather unexpected I’d say. Good job Gel, getting out of the space ship and all.

I do rather like what the episode did in the second half, as a zombie chase would have gotten old for the rest of the run rime. The narrator is put on display to carry the entire second half since the infestation just gets to… fester. Well, ferment, I suppose, in the words of the zombie lifestyle guru as they go about their business living off the life insurance money and avoiding the life insurance hitmen trying to cut down on expenses. Which… is not an idea I can say I’ve seen explored in zombie fiction previously, which is an accomplishment given how played out that whole entertainment area has become.

There’s a way to do shot composition and editing so that if you are making something you know is going to be censored if you show it in full you don’t have big censor blobs in the middle of the screen. You can cut away and the in-between bit will come back in later for the home video release for instance, or a fancier technique would be framing the shot in a way were it can be done in a way allowing the editing team to zoom in to a certain showable part and the full frames can show the more graphic content in the full version.

What is weird to me in cases like Pupa, where the team seems to have no real sense of what to actually do with the camera, the randomness occasionally ends up with well framed shots that are completely showable and yet wholly get their points across with a level of sexualization, gore, and public bathroom decency violations it clearly wants to be walking. One then wonders “Why can’t you be like that all the time?!” before remembering it likely really only happened by chance anyway.

This all said, this is the most interesting episode of the series so far. It had an extraordinarily low bar to walk over, but regardless: the live action video of a fish being gutted on skyscraper televisions while Yume is in her inner mental city world I felt was intriguing as visual presentation.

You can’t be rolling out more creepy teddy bear stuff and then have a human character give lines like “I’m so hungry I can’t bear it!” though. That’s just begging for me to spit out my beverage into hearty guffawing.

Sometimes this series is like an embarrassing reminder for things I still need to do. That reporter girl featured for all of a few seconds questioning Mama Iori during her little daydream sequence? Designed to look pretty much identical to Fran Doll from Turn A Gundam, which just sheepishly reminds me I never actually finished that series. It’s the little things, really.

Things that weren’t so little: I’m pretty sure we do not need full frame shots of Aila’s tongue slurping down massive ice cream cones.

All that be as it may, this was primarily about getting the folks who don’t actually build their own models to actually get into the construction spirit.

Which, in this case, means more Reiji and Aila and their mutual I Am Visibly Frustrated By You And Yet We Can’t Stop Seeing Each Other dynamic while they build the machines selected by their Mysterious Benefactor. Reiji gets a Begining Gundam, which is a nice nod to the Gunpla Builders Beginning G miniseries, and Aila gets a Command Gundam from SD Gundam. And Reiji can’t hold still worth his salt when it comes to actually nipping model parts off, despite his piloting capabilities. I hope they’ll find something to do with these little models later rather than just letting them be one offs, as I thought this was a nice little time for the both of them as characters even if Reiji still has no actual idea what Aila’s name is.

Not sure why the Gunpla Mafia went against direct orders and tried screwing around with a non-tournament battle and trying to defeat and sabotage non-tournament Gunpla models though. It’s a big risk for pretty much zero tangible payoff. That just was kind of hokey, and resulted in a bit of an anti-climatic end for C.