I’m likely not attending my looming and upcoming actual ten year high school anniversary, but I did dance with this number from way back when all over again.

Here is my patented two step process to determine if you have any interest or business in dredging up and watching this show:

Firstly, Burst Angel is an anime original television project directed by Koichi Ohata, he of eternally notorious works like MD Giest, Cybernetics Guardian, and Genocyber that effectively defined the anime sections of western video rental stores. He is noteworthy for being a genuinely skilled mechanical illustrator (having done design work on the likes of Gunbuster and Mobile Suit Gundam: Char’s Counterattack) but has generally faceplanted his way through multiple Director chairs over the years instead. In turn, he is one of my pet favorite directors, because one always has the sense in his work that he is just flying by the seat of his pants.

If none of that made any sense to you, here is my “Secondly,” the literal first two minutes of Burst Angel: A crow lands on an altar shaped building in industrial landscape, and a skeleton covered in wires bursts out and violently eats the crow while tearing it in twain. It summons a raging giant robot in a sunset soaked cyperpunk city, and another robot shows up with dual wielding automatic pistols. The skeleton commanded robot hurls a dump truck at it, and tries fighting this other robot with machine tentacles while the pistol robot sprouts in-line skates and does Anime Robot Action Stuff on a highway being ripped apart.

Burst Angel is not a very smart show. 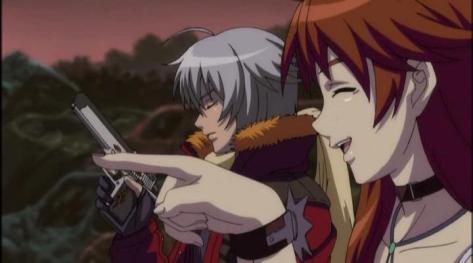 Fundamentally, what the program really amounts to is a design by committee job.

It is part Bubblegum Crisis (all female team with heavy hitting combat hardware, focus on law enforcement, cyberpunk aesthetic), part Cowboy Bebop (western flavors, episodic targets for pay with occasional ones dealing with larger plot, some music design sensibilities), and Generic Ecchi Fanservice Show 128 (costume design, will-they-or-won’t-they yuri tones, etc) as commanded by a Director with all the narrative and thematic skill of someone like Michael Bay who has a great track record for making products successful in western video markets.

Burst Angel was produced by GONZO in 2004, one of the heights of the western anime boom years. They had their market research, they had the cash, and by word were they ready to use it to throw something like this out there to see if it would catch fire. It is not a bad business plan, honestly.

If you have been watching anime long enough to where you are actually in the part of the internet to be reading this, you have met all the main characters before with different names and hairstyles in other shows. Amy is our underage computer genius hacker, Sei is the at times stern but evenhanded commanding leader, and Meg is the spunky and energetic girly girl with a tendency for getting repeatedly captured and coming thiiis close to falling out of her own shirt. Finally, Jo is the muscle with an oddball tatoo and religious symbolism trappings who has a behavioral “On / Off” psychological switch where she may as well be a slightly miffed Rei Ayanami when she is “Off” but rapidly changes to rage fueled bloodlust status when combat is afoot.

Due to the aforementioned ecchi ingredients in the planning process, there is also the audience insert milquetoast male team member, Kyohei, who intends to save up the funds to study abroad and train to be a pastry chef in France.

Here is the funny thing one picks up on after a while though: one can clearly tell Ohata has no idea what to actually do with that kind of character. It’s just not in his skillset. Kyohei is not an action figure power fantasy (which is honestly Jo’s gig here), he is required to have plot armor because of his audience insert status so he can’t be immediately turned into a gore soaked bloody pulp, and he isn’t an empty female character Ohata can put in a weirdly sexualized boob outfit and be done with it. So Ohata kicks him to the curb for the overwhelming majority of the program, multiple whole swaths of episodes in a row go by time and again without anyone even mentioning Kyohei in dialogue. It’s like the kid was an ugly holiday sweater Ohata was not allowed to return to the planning committee, so he buried it in the back of his room and only brought it out when the giftee was around.

The program is all very front loaded with what it does, and I don’t just mean in the department of the female characters either. Plenty of concepts get brought up, like crime is on the rise but apprehension rates are down because an armed to the teeth police force and a change in firearms laws has meant the number of crooks caught alive has decreased, but they are all window dressing to make the show seem smarter as it never actually follows up on the finer points of such concepts. Cybernetic enhancements and associated other tech abound that it waves around sometimes, but the series doesn’t aim to do anything about their development or meaning, it’s just Cool Stuff that can be wheeled out every now and again. One episode has Meg having her “Chi” unlocked, wherein she then has incredibly skilled martial arts capabilities until the end of the episode. Is it ever mentioned again? Nah.

This is a program that is, perhaps quite appropriately, not designed for subtle nor subtitle reading. You watch it dubbed in your language of choice. It’s just here to be consumed.

Something that does significantly work against Burst Angel as a television show over the long term all these years later is one of the side effects of its own aim towards success: there is sort of way too much of it.

Cowboy Bebop, which is another part of its key ingredients list, was able to hold up with its “filler” as it was just fine because the stand alone episodes that don’t address the “core” plot are still generally rich and filling character stories. Burst Angel has a similar body and blueprint, but Ohata can’t give those episodic parts that same soul because it is not what he has in his toolbox. One begins to suspect attention was waning at varying points as well, particularly in any of the standalone episodes in the second half. It would actually function better were it slashed down to a more modern 10 -13 episode framing and still be able to retain some of those side adventures, so if someone was actually somehow sufficiently interested I could work out those episode selections for you.

Individually, the episodes are not really great but they don’t generally sway into awesomely terrible territory on the scale of Ohata’s more legendary works either.

The show is just sort of… competently average on the whole, in many respects, like each episode was a potato chip. You eat one, and you may go “Well, that was not really all that bad.” It was not very filling, or loaded with complex exotic flavors, but one probably found a kind of flighty and small momentary satisfaction from what it had to offer. So you pop another, and it is a similar feeling. Before you know it though, you’ve absentmindedly marathon eaten the whole bag of potato chips and you try moving afterwards and you go oh good lord I feel bloated and queasy and why did I ever let myself go.