This Week: The Five Star Stories and Black Magic M-66

The eternal gift of the OVA and short anime film market: the ability to retreat from trying to keep tabs on too many currently airing shows and larger series projects in progress while still having the satisfaction of being able to get to a finale.

Despite it being a very well-regarded and still running classic from the 1980’s, I have never read the manga for The Five Star Stories. What I do know is that it is a richly defined and lushly complex space opera combining science fiction and fantasy elements with massive attention to world building and a colossal cast of characters and a very distinctive visual flair.

As an outsider to that whole franchise, I thought this film was a really lovely time. 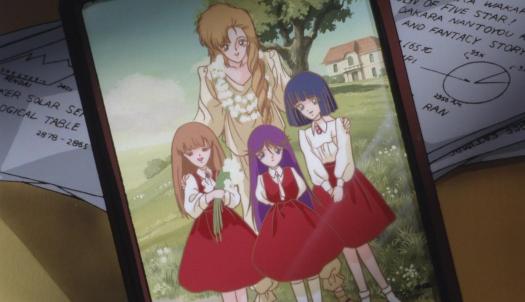 With a universe where folks are wearing everything from draped fabrics, things echoing period aristocracy, more modern business suits, and everything in between, it all looks cohesive and vibrant. A large amount of painstaking work was involved in all the various clothing ripples, wrinkles, and other character detail efforts that help to drive the point of how incredibly ornate everything is. There are a lot of finely drawn billowing strands of hair for instance, and I am both very thankful to the animators for that as I am also so sorry for how many weeks that must have taken to accomplish.

This is all entirely appropriate thematically, as we are focused on civilizations which have forgone the development of weapons of mass destruction. Rather, realizing that annihilation would kind of defeat the point of taking a territory, there are instead things such as the series version of mecha, the Mortar Headds, incredibly detailed and crafted machines that are treated just as much works of art as they are tools of war meant to last years and years, even being passed down to others. And I can dig that aesthetic, particularly in a series of nations and populations over multiple planets. In a film that ranged from conventional desert ground rifle infantry to lightsabers, the Mortar Headds both stand out while also not being the only tool around.

It merged very diverse sets of styles and genre parts together effortlessly, and it was a lot of material to explore and bring up (genetic engineering and grand ball style selection of the Fatima co-pilots, etc) while also not feeling like I was being overburdened as a viewer or merely being drilled exposition at. It has a sweeping scope and is “epic” in a grand and classic style that speaks positively of the breadth of everything it wants to showcase.

The most glaring issue I have with this anime, honestly, is its running time of about one hour. While certainly intended to be an introduction piece to the world, adapting the first manga arc, it is that kind of duration that really makes one desire an additional twenty or thirty minutes of the experience even if they are fully fulfilled when the credits roll. While it certainly did everything it could in the hour to make full use of the time without feeling rushed and I don’t feel it cut too many corners, I think having that bit of expanded time for another act or so would be the kind of thing that would have made it a more enduring classic as a piece of anime film or something that could have been leveraged to reach far wider audiences than it did.

At the very least, it is hard to shake a disappointing feeling that such a grand universe that was so fully realized even here did not have even more time to shine as a piece of animation.

A little three quarters of an hour OVA based on the first manga released by Masamune Shirow, and probably most famous as being the only anime of his work he had direct involvement in.

Have you seen The Terminator? Predator? Or any number of other 1980’s action films from that very particular style of media zeitgeist?

Then you have essentially seen anything Black Magic M-66 has to offer.

But I don’t think this is necessarily a bad thing.

The two M-66 units move around very fluidly during their action sequences. They leg sweep, crab walk, and otherwise contort and conform themselves very proficiently, and in their jerkier moments they give off that sense of falling into that Uncanny Valley territory that honestly makes them more believable as machines.

Going along with that, as we are presented with two escaped M-66 units, having the “expendable” one of them be defeated by the military early on allows us to see the full range of their capabilities (anti-personnel shrapnel launching, poison gas, etc) and is a rather simple but effective narrative choice. It shows us everything they can do, so it avoids the potential issue of the viewer feeling like new features were just being pulled out of thin air come the later stages. It keeps the threat, well, threatening as the film transitions into the sections where they hunt and pursue their target.

The characters are not anything interesting to write home about. Sybel as our leading lady is a Tough Cookie Reporter who wears a bandana and is prone to swearing. Her partner Leakey is the more sniveling and scared variety of stock colleague. The Major is… only known as Major. The scientist character who made the M-66’s? He has those zany mad professor swirly lines in his glasses lenses. It’s that kind of character writing. Nothing interesting and you’ve seen it all before,  they are here to go through their motions, rather than be complex individuals.

But to its credit, it also is not doing much in the way of any grandstanding or Trying To Deliver A Deep Message either. It’s very standard, “my first manga turned into my first anime” kind of material, where one is more prone to working off of more baseline and less intricate tropes.

And I think that’s fine. Average and forgettable in large parts sure, but it has some nice bits and otherwise doesn’t outright faceplant into the dirt by reaching beyond its capabilities. Which is a lot better than others manage. It just wants to be an easy to watch action flick.

There are robots. The robots escape. Military guys fight robots in the forest. Robots have a target. Only the intrepid reporter mixed up in all this can save them. Chase scenes and large scale metropolitan property damage ensue. ‘80’s music. Cyberpunk.

It doesn’t hurt, and you can switch on a lot worse with dinner after a busy day.