Thus far for my personal anime horror reflections this month I have gone into antsy gore and nudity, slasher and splatter, and borderline exploitation.

I thought it was high time then, with this second to last entry for this month on the subject, for some incredibly dumb horror before I finish up with something special next week.

One of my favorite bands is a group called Electric Eel Shock, who I have had the pleasure to see in a small venue concert abroad previously . They have a song called “I Love Fish But Fish Hate Me.” That title pretty much perfectly describes how I felt during this movie, those bait and switch loving sea swimmers.

This is effectively two separate kinds of movies, and it feels like it is having a very definite identity crisis over what it wants to do.

On the one hand, the first half is spiritually the sort of modern intentionally silly-dumb schlock channeling SyFy Original Movie territory, where a shark with legs can attempt to navigate a summer cabin in the woods and camera shots are at times set up to just be intentionally funny over genuinely scary. That is the pretty alright part of the film. And, bonus, it does not do that lame horror movie thing where you just wait around for half the film for the titular monster / serial killer / whatever to show up. This is Tokyo Fish Attack, and you know what happens within ten minutes of hitting the ”Play” button?

Would you believe it, there is a fish attack.

The narrative gets bored of this whimsical junk food though, so it changes objectives around the midpoint. Now instead of the horror goofiness of seeing all kinds of fish, sharks, squids, etc run around and terrorize folks on land, and we switch to… well, I would say it is effectively a zombie film once the shift fires. And it is nowhere near as interesting as the movie we have before, and there is a massive whiplash inducing tonal shift on top of it trying to make everything darker and more oppressive. I read up and came to understand much of this story is also what happens in the manga, with some changes made to character fates, but still.

Sure the first half was dumb as bricks, but it kept me interested enough seeing what the sea animals would do on land. That would give it enough personality to ride the hour out, easy. It may not have gotten a high score by the end, but I would have at least had bad movie fun with it. The second half post-shift was just boring me though, regardless of what the horror imagery was up to in trying to sell the hopelessness of the situation.

I was in the middle of watching a movie where fish attack Toyko. The film in the player says it is called Tokyo Fish Attack.

Yet half of it is really a zombie film, and it is not even an average one. It is like someone taped over the second half of the movie with another quasi-related horror production featuring the same cast.

As a final note, the way the character arcs of Erika and Aki were handled leaves a bad taste in my mouth. The former (the sex crazed skinny girl) serves no purpose but to one dimensionally torment the latter (the more socially awkward and heavier one). When Aki actually snaps and refuses to take the abuse anymore, the narrative punishes her far worse for the transgression than anyone else in the entire film. Not only that, but it is shot in such a way where we are to feel as though Aki more than deserved the penalty for her heinous crime of not being a doormat.

These characters take up a fair amount of screen time, but at best their presence does not accomplish anything for moving the story along. At worst, it is a cheap attempt at characterization with an unfortunate message, intentional or not.

Ridley Scott’s Alien was definitely a movie that was made that one time and a lot of people really liked it.

So much so, Roots Search just wholesale steals pretty much everything in the film that was not industrially welded to the ground.

Imagine Alien. And if you have not seen it, just imagine a haunted house as a space station, because that is essentially what Alien is once the titular beast shows up. Except all the inside attractions have been taken down so everything is almost uncomfortably sterile and plain. So you still assume there is something lurking around every corner. And then there is something that does just that. With murderous intent.

Now take out the Facehugger, Chest Burster, and Xenomorph. Add in a dusty psychic humanoid alien entity who can peer into your mind to recall and hallucinate your deepest personal nightmare, trauma, or regret. Its only purpose is to exterminate life. And it can generate a flesh tentacle… beast thing, which has a core body construction of legs and appendages that is Definitely Not A Facehugger Because This Is Bigger And It Can Produce More Phallic Entities. Original Character, Do Not Steal.

And you know, if that was all the film was, it would probably at least be durable enough to get an average rating out of me. It was the 1980’s, and psychics were pretty much as mandatory as kneesocks and arm warmers (which Moira, the female lead, also has in spades. And we establish her character at the start by verifying, yes, she is indeed also a psychic). Doing the Alien setup with a mind warping hellspawn is not the worst idea either. I think one could even make a pretty good movie out of that even, with the proper execution. One of the only things you have left to you in space is your mind, after all.

Alien is just ever so shy of two hours long.

Roots Search starts doing its final zoom out to the credits shot once the clock hits the forty minute mark.

That should tell you pretty much everything you need to know about all that is absolutely  horribly and terribly broken in this production, because it is trying to tackle three times more material than it has room for. To call characters paper thin would be generous. To call the animation bare bones is offensive to skeletal structures. It is that kind of bargain basement production when we actually drill straight through the floor into bedrock.

…It doesn’t even really have an ending.

The film just hits a point where it actually stops trying as a physical act of its own existence. It almost literally goes “OK, uh, look, I’m really *wheeze* exhausted from all this sprinting trying to cover the entirety of Alien, and *pants* this seems like a good place to *hacking cough* stop for now.” Then it is as if the animators never returned.

I have rooted and I have searched for genuinely complementary things to say about Root Search. As I said, the core concept of being a psychic Alien knockoff I do not think is inherently terrible. And I think that is part of why I tried so hard.

The space station the film takes place on is shaped like a human head wearing a gas mask.

So That Is A Cool Thing. 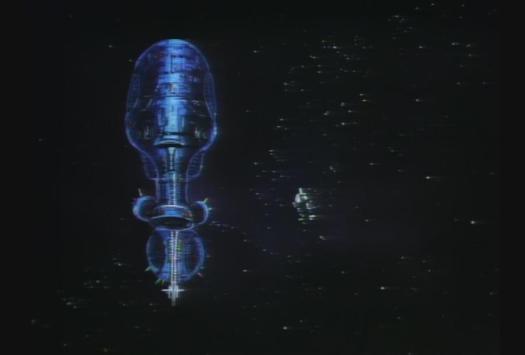