October continues, and in doing so, my blood and horror backcatalogue binge can not be slain.

This is a roughly eleven minute OVA, so it admittedly has an incredibly tight amount of space to work with. It’s also a part of and tie-in with the game series of the same name, which I have never played.

It has a promising enough first minute or so, I’ll grant it that.

Screaming and crying blindfolded individuals whimpering for their lives. 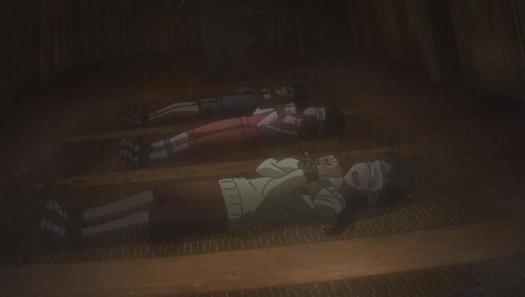 That’s good. Excellent, really. I like it when a production, and particularly a horror one that wants to rely on more gore or shock legs, realizes their own running time and how incredibly valuable it is to get a message across.

That whole sequence and its content conclude over three minutes. The rest of Missing Footage is watching various walking anime stereotypes do clichéd anime things. We have Little Sister Who Really Wants To Give Big Brother A Naked Rub Down In The Bath. There’s our Sexually Exuberant Girl Who Keeps Fondling Childhood Friend Girl’s Breasts. And so on, and so forth, and I just can’t bring myself an ounce of willpower to care about any of it.

Let’s be perfectly honest: these characters are walking mannequins that exist for the sole purpose of getting snuffed out. That’s what they’re here for, that’s what we’re here for. Their nonsense is irrelevant to us. And that’s absolutely, completely, and totally fine.

But by itself, and judging the work on its own merits, this short is meaningless. At minimum, the content here is only useful after seeing the Tortured Souls episodes. I watched this one first (as it had come out a year earlier), and had to come back and watch Missing Footage again after the miniseries.

There’s extremely little actual horror on display. Everything in that department happens either off screen or in shadows so thick even cranking the brightness on my monitor doesn’t show anything. There’s some blood fountains coming from off camera and that’s about it. Which again would be thoroughly OK, because sometimes the best horror is that which our own mind generates for us. But I need more to work with than just sound effects of blubbering girls and the camera going “Horror is definitely happening here in this room. You can’t see it, but don’t you worry. Definite Horror. Yup. Yessiree.”

It does have one nice cutaway shot where a pair of scissors is held above an eye before a camera shift to the wall while the metal snipping, sobbing and tissue destruction make their sounds, and I’ll credit it where it’s due for that.

But, since this short covers material that requires knowledge that only later comes from Tortured Souls to have any impact (without playing the game, anyway), and the intro scene from Missing Footage is covered in more detail there, both graphically and narratively, I don’t think the normally positive statement of “Has one good shot for eleven minutes” really saves it from the scrap heap.

I think this is a situation where I missed an internet boat or something, because I’ve seen a lot of folks in recent months mention this as a benchmark of gore and violence, and now I’m not entirely sure why. Admittedly, gorn focused horror is something that tends to be one of our more limited releases in the modern era, and this is one of the most recent ones. I probably am used to too many ultraviolence affairs from the rental video store days of anime consumption.

If you’ve seen the conclusion arc to Another, the violence levels on display here are what I imagine that should have probably looked like to maintain a more serious tone for those sequences. And if you haven’t, I won’t go into spoiler details. But, the two are remarkably similar in shot compositions, cutaways, and the like, just dialed one degree higher here since it’s an OVA. Which is to say, Definitely Gore by Anime Television standards, but I think it’s really only average at best compared to its predecessors in the OVA department. But again, it’s not like we get these kinds of things all the time these days.

And honestly, taking everything else into account, I’d say this is pretty alright. Average, maybe. But not bad.

There are a fair number of cost cutting measures in play; lots of rough 3D graphics for hallways, a few cutaways that cinematographically indicate they were done more to avoid having to animate rather than for impact, that sort of thing. Nobody really has a whole lot of design work put into them, aside from maybe Naho Saenoki, so they do tend to be hard to remember the names for. But, as I mentioned before for Missing Footage, they’re essentially walking bags of bodily fluids, so this isn’t the worst situation. Just underwhelming.

The narrative is confusing at points due to the number of layers it’s trying to weave and the limited number of episodes, but it keeps the engine running and fuels the blood fires all the way through. And really, that’s honestly much harder for a gore production to generally do, even with a pretty rudimentary plot. This is a situation where it likely could have actually benefited from an additional episode or so, rather than the other way around which I feel I’m more prone to recommending.

They aren’t necessarily unique, but I like the attempt at multiple mysteries it wants to weave around each other and I think having more time to dance the red herrings game more thoroughly with each trace element would have assisted it. I’m sure the game has a colossal level more detail than is present here given the number of threads in play, and crunching it down into four episodes feels like it was compromising itself too much there. This would all function better as a Mystery With Horror than as a Horror With Mystery. But more episodes creates more expenses, and there’s a limited market for this sort of thing. So I can understand the production folks situation. But I also don’t need to be fully agreeable with it.

If you watch all four episodes back to back and treat it as a movie, I’d probably maybe watch it again someday. I’d pick something else if I was going for more raw gore hits per minute, sure. But it’s pretty OK as Halloween fodder from a more recent vintage.