You know, I told myself I wanted to try and give a go at weekly thoughts on currently airing shows for Fall season. Vary things up a bit, and give another column outlet outside of the usual backcatalog spelunking.

But much of what made it on my list to follow airs at odder points for a Wednesday posting schedule this go around (and Pupa is currently a nonstarter in search of an air date), so it looks like many of these thoughts will come days after airing. No chasing the Day And Date dragon. And That’s OK.

An episode so nice, I watched it twice. Or rather, once for the initial hype train go around, then a later viewing to be able to break it down more to see what’s ticking, kicking and if I actually liked what I saw.

Certainly there’s the whole “Studio Trigger is saving anime” hyperbole going around, which is operating at multiple different levels. Folks who who hold a passing familiarity with some of the previous work of many of the staff members and are just looking for their next “ZOMG wild and zany” fix, people who enjoy seeing how a new studio decides to position its first TV show, those who are fans of following illustration styles and influences through the history of the medium, and so on.

So this is The Big One this season.

You know what I noticed watching this show?

It has a sensation of speed, kinetic energy throttling ahead on multiple cylinders. An effect not at all dissimilar to something like Redline, in more ways than one and not all of them in the best way. Most notably, the narrative of the super powered sailor suit introduction could have been done better given the rape trappings they opted to go for, rather than just blasting ahead through it to get us back in the fight and a return to the action. For now, I have no reason not to trust the studio will aim to make due on themes they want to use; Hiroyuki Imaishi has distinctive ideas on camera direction and techniques, and Kazuki Nakashima does enough writing outside of anime. I like to imagine this was Trigger just hurling a raw fastball at the plate, since the first episode of their first TV series is the sort of thing one might just want to kick off with a screamer pitch and leave everything else for later, damn the consequences.

It is gasoline caffeine amphetamines.

It has that wild-but-oddly-focused sneering look in its eyes where it’s so pumped up it thinks it can do things like run a mile to the store and back in ten seconds. And by golly, there’s so much unleaded gumption in its system it might actually be able to do it.

And bring back snacks.

P.A. Works sure do love their background art. Yes indeed.

I’m of the disposition this show will be entirely made or broken on the high seas of where Manaka’s character arc goes. At the moment she’s positioned as the primary romantic interest for two male leads, with a side context of Chisaki getting the “Well, if Manaka were to go away, you’d get to step into her place in Hikari’s heart” aside. And we have the whole mythology of the sea god and a historical sacrifice. And Manaka has already nearly gotten herself killed in the first episode. Gears are in motion.

But for now she’s mostly this blubbering mess.

A moe stew of eye welling, quivering lips, and an inability to stand up for or help herself in any way. Which is justifiable if it goes somewhere, and I really hope it does. This could be an interesting little immigration and acceptance of values play amongst a romantic drama, but character development is going to be so highly critical to keep the story rich and fulfilling over just blurting out “Oh. By the way. Immigration and racism and stuff” via blunt force narrative trauma to the head.

While perhaps drawing the most similarities from the community at large to AnoHana, I haven’t actually seen that particular work yet myself, so the most immediate thing when I think of Mari Okada’s scripting and series composition work from recent years is Lupin the Third: The Woman Called Fujiko Mine. Which, admittedly, is an entirely different genre of show (and I gave some impression on here). But in that case, it had lots of delightful stuff up until the final third of the series where we had characters just stand around literally explaining the plot to the audience, which can at least in part be chalked up to a shorter episode run.

I think there is definite high potential though; I don’t think Uroko-sama’s sniffing and comments about Manaka’s aroma and physical development as a young woman are there just for a silly one liner gag. There are places that can be run with, and sensibilities that are all nipping to be explored. So all we need is the followthrough.

I hope the fish knee is a consistent character.

Beyond the whole curse thing, they could be fun, whimsical, or a larger part of some whole puberty and coming of age set of affairs. And yeah, I’ll consider them a separate cast member for now. The fish knee has their own mouth and everything!

I hemmed and hawed a lot about if I wanted to pick up this series. There was a period of several weeks though where I did some work and lived in the Chernobyl Nuclear Disaster Zone though. So I finally decided I would just pull the trigger on this one. It should make for an interesting commentary post when all is said and done, at the very least.

Since the first and second episodes are really just dealing with character intros: We have our girl who eats a lot, the quieter animal loving one in glasses, and the edgier “Screw the rules, we’re doing this thing” leader. That’s fine for now, and the wasteland is otherwise rather desolate even with the Rescue The Child mission, so leaning on the more headliner parts of their characters is a fine enough way to keep something happening in the short term. I just hope it’s not all it has in the tank, as at the moment the writing is rather bland. Girl Who Eats A Lot could run into some problems for instance, given that I’m sure all those nice foods and packed picnics can’t last forever, and that could be an aspect to smack around.

I feel it’s terribly over stylized though, which more than knew going in and I doubly know sounds patently ludicrous in the same post I’m talking about Kill la Kill. But it’s a colossal difference in execution.

Instagram style filters are everywhere, it’s got shaky-cam, hue and saturation level settings are all over the place, character outlines go in and out of thickness, but I’m not really sold on any of its aesthetic yet. This is the kind of modern Hollywood highly digitally processed look that generally appears “better” in motion rather than when it’s sitting still. It’s a shame, as I think the backgrounds would be lovely and just fine without all the extra layers; they look otherwise spot on.

The differences and perceived inconsistencies in character reactions to the whole “human doll” thing between just these two episodes was rather jarring. It seemed to be a bit of a sticking and sensitive sore point for the cast when there was a whole “Would a puppet enjoy eating a riceball so much?” exchange in the initial episode, and then Aoi goes off exuberantly talking about french comic ballet history and then owning the concept as a representation of their nature.

I never read the original manga, but based on what others have been saying it looks like the show has been plowing through chapters? So the show is rushing towards something, and some of that characterization may have gotten bulldozed in the process.

Which is… odd, since Coppélia and its themes seems so important to Coppelion’s objective that the whole story is named after it.

Given that the trailers had car chases and a giant robot spider, I’m sure things are afoot. I just hope to eventually be more invested in the characters, if they really want to push this “puppet” thing regarding the true nature of the girls as hard as they are implying.

On hold until the Nadeko arc wraps up, so I can watch the whole arc at once.

I would watch a modern rendition of The Brave Little Toaster staring Ru-chan the Roomba. 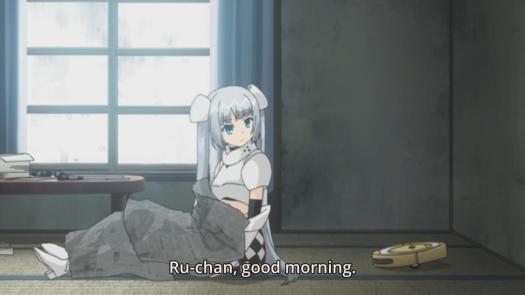 Hangers is a weekly series containing my passing thoughts on currently airing anime productions. Opinions, as always, are subject to change.